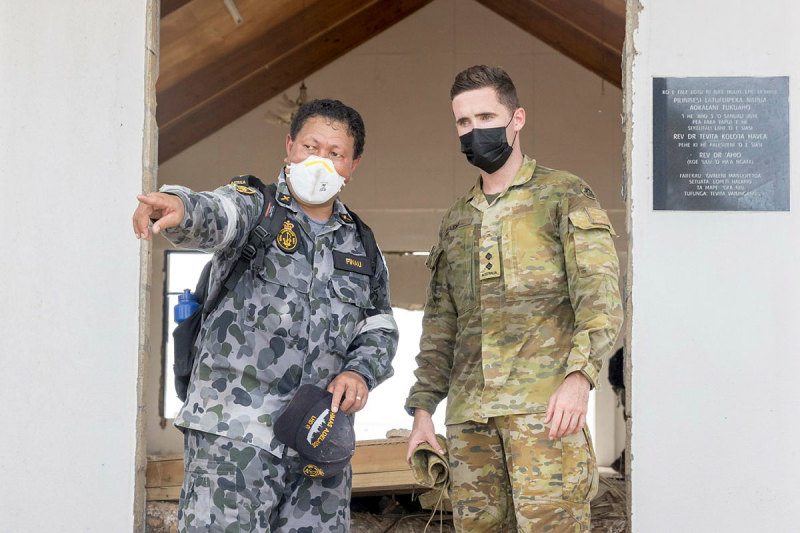 Australian soldiers have hit the ground in Tonga to help the country recover from a devastating volcano and tsunami after the country’s largest warship recovered from a power outage that had it stranded on the shores of the Pacific nation.

At the request of the Tongan government, an advance team of 30 Australian personnel hopped off HMAS Adelaide on Friday and went ashore in the capital Nuku’alofa to begin reconnaissance work on the recovery. This included members from the ADF’s 7th Combat Brigade’s 2nd Combat Engineering Regiment, a Department of Foreign Affairs and Trade liaison officer and a Tonga-born navy chaplain.

HMAS Adelaide was hit by a COVID-19 outbreak late last month as it sailed to Tonga to take aid to the country following the tsunami, which was then coronavirus-free.

At the time of the outbreak on the ship, Defence Minister Peter Dutton said the vessel would be kept “at sea to make sure there’s no threat”. The ship then suffered a power outage leaving it stranded at Vuna Wharf, but this has been fixed and it has fully re-entered service.

The fact that personnel with COVID-19 have been kept in strict isolation on board, has allowed the ADF to send the personnel onshore at the request of Tonga.

A larger contingent of ADF personnel will arrive on Atata Island to begin clearing debris and repairing or stabilising buildings and infrastructure in the coming days after the mission was delayed by weather conditions preventing safe transport between HMAS Adelaide and the island.

Defence said personnel who had entered Tonga were adhering to strict COVID-safe protocols throughout their deployment.

Tonga last week went into lockdown after finding COVID-19 infections in two port workers who were helping to distribute aid arriving in the country.

At the time there was speculation the virus was brought to the nation by HMAS Adelaide, but defence officials believe this to be highly unlikely.

ADF Chief of Joint Operations Lieutenant General Greg Bilton last week said the two workers who tested positive were operating at a completely separate wharf from the one where HMAS Adelaide unloaded its supplies.

“Equally, we unloaded in a manner that was COVID-friendly, contactless,” he said. “So I don’t think there’s any connection, there’s no evidence of that.”

He also confirmed the ADF would take back samples from the Tongan cases so that an Australian health facility can assess the strain and find out which country it came from.

Another ship, HMAS Supply, departed Sydney on Sunday and will head to Tonga carrying half a million litres of fuel and humanitarian and disaster relief stores. As an auxiliary oiler it will also potentially help sustain other vessels including HMAS Adelaide.

Defence said HMAS Supply was always scheduled to go to Tonga and its mission is unrelated to the COVID-19 infections and power outage on HMAS Adelaide.

The underwater volcanic eruption and the tsunami has been estimated to have affected 84 per cent of the Tongan population, with some of its outer islands hit the hardest.

There have been three casualties.