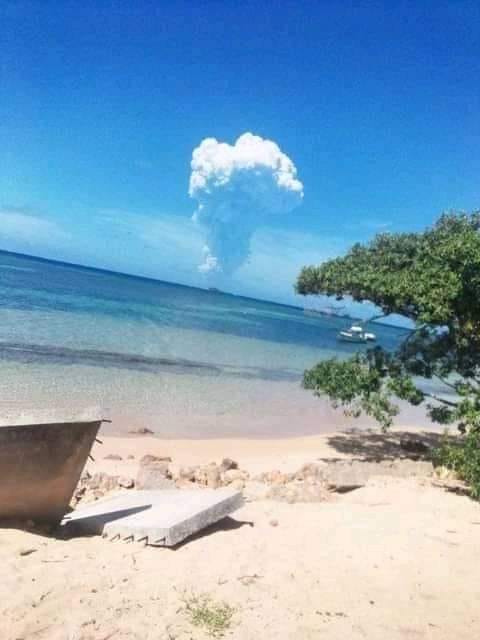 A Pacific volcano that explosively emerged from the sea in 2014 has erupted again.

A plume rose about 15km into the air, with varied reports on whether it contained ash or was just steam.

The explosion could be heard up to 170km away, Volcano Discovery reported, citing social media reports.

Hunga Tonga-Hunga Ha’apai is an undersea volcano, whose caldera now pokes through the ocean surface.

It appeared in 2014 during an undersea eruption. Normally islands formed in this way only last a short time, but seven years later it’s still there, the ash having chemically reacted with the sea water in a way that’s hardened it considerably.

In 2019, animal and plant life was found thriving on Hunga Tonga-Hunga Ha’apai.

The Global Disaster Alert and Coordination System, run by the UN and EU, said there was little likely impact on nearby populated islands. Hunga Tonga-Hunga Ha’apai is uninhabited by humans, and about 65km northwest of Tongan capital Nuku’alofa.

GeologyHub, a popular YouTube channel, said there are four vents at Hunga Tonga-Hunga Ha’apai – and it appears likely this eruption came from one that’s still completely submerged, suggesting perhaps another new island could be formed.

Photos posted to social showed the plume could be seen from the Tongatapu, Tonga’s main island. Others taken from flights showed the plume breaking through clouds in the upper atmosphere, and it was also captured in satellite imagery.

Undersea volcanic eruptions are frequent in this part of the Pacific. In 2019, one created a new island west of Tonga, also creating a pumice raft bigger than the island of Manhattan.