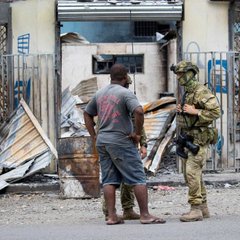 As the deadline looms for the regional peacekeepers who remain in Solomon Islands, there are questions on whether the police are up to the task of maintaining national security.

Around 200 police and soldiers from Australia, Papua New Guinea, Fiji and New Zealand have been in the capital Honiara following last month’s riots.

The security situation is now calm and much of this is credited to the presence of the foreign peacekeepers.

But the political climate remains tense, with little dialogue between the government and its opponents, which is a cause for concern among many Solomon Islanders.

“The security situation hasn’t settled down well yet. There’s lots of stories that something might happen. It’s good they [foreign peacekeepers] stay with us in case anything happens next year. We just don’t know,” one man told Pacific Beat.

Tension spiked earlier this week with the arrest of a prominent political party leader and there are reports of isolated attacks on people who come from the same province as the Prime Minister Manasseh Sogavare.

When Australia’s police and soldiers were deployed in late November, the Prime Minister Scott Morrison said they would only stay for “a matter of weeks”.

A spokesperson from the Department of Foreign Affairs did not confirm the exact timeframe of how much longer they would remain, but told Pacific Beat that “Australia will continue to consult closely with the Solomon Islands Government and our regional partners on the details of our support, including its duration.”

“Our mission is to support stability and help give local parties the space to achieve a peaceful resolution.”

The Solomon Islands government did not respond to questions on whether it would ask for a longer period for troops on the ground.

New Zealand’s Ministry of Foreign Affairs said police and military will be in the Solomons until the end of December.

“No request has been received from Solomon Islands Government to extend New Zealand’s presence at this time. Any such request would be carefully considered,” a spokesperson said.

While many Solomon Islanders want to see the peacekeepers remain into the new year, Ethel Signimanu from Malaita Mothers Leader Dialogue believes the long term solution is in the hands of Solomon Islanders, rather than foreign military or police.

“The area that is most needed will be will be on technical support to the existing capacity of the police,” she said.

“I think in the long run, it’s best that Solomon Islanders find their feet and stop being dependent on international forces and…deal with the situation, within the best capacity and ability possible,” she said.