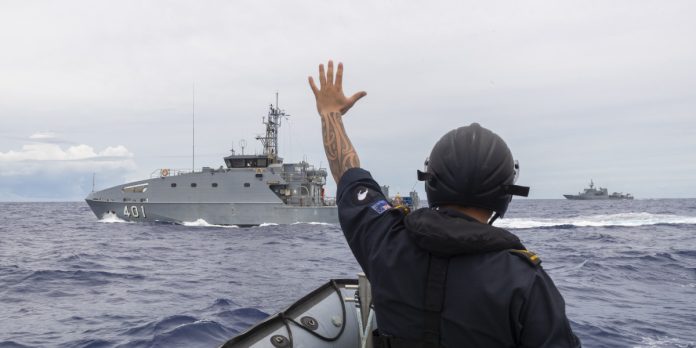 The two ships were also able to conduct exercises to improve interoperability as they sailed from the area around Kadavu Island out into the Fiji Exclusive Economic Zone to carry out patrols.

Commanding Officer of HMNZS Wellington, Lieutenant Commander Philip Davies, said although there was no opportunity to interact with the crew at a personal level, the ships operating together provided the chance to practice communicating through various means and manoeuvring whilst in close proximity.

“These skills are important when we may be called on to assist in a response to a natural disaster. Coordinated patrols also demonstrate New Zealand’s commitment to combatting illegal, unreported and unregulated fishing in the region.”

New Zealand is one of 17 nations contributing to the Pacific Islands Forum Fisheries Agency’s efforts to prevent, deter and eliminate illegal, unreported and unregulated fishing in the region.

Twenty-four vessels from a range of countries have been reported to the relevant authorities.