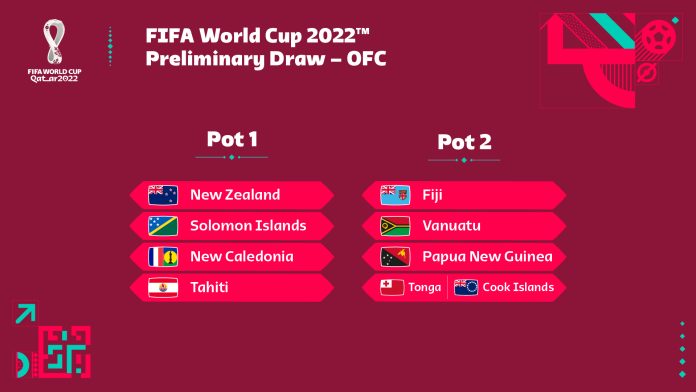 The road to the FIFA World Cup Qatar 2022 for OFC hopefuls is now set after the completion of the preliminary competition draw held Tuesday at the Home of FIFA in Zurich, Switzerland.

The OFC qualifiers will be played in a mini-tournament format featuring eight teams and consisting of a round-robin group stage, semi-finals and the final.

Prior to this, a single qualification match will be played between Tonga and the Cook Islands – the two lowest-ranked OFC teams in the FIFA/Coca-Cola World Ranking – for the right to take part in the preliminary competition mini-tournament.

A clash between the 2016 OFC Nations Cup finalists, New Zealand and Papua New Guinea, awaits in Group B, with the two nations named alongside New Caledonia and Fiji.

Some mystery remains in Group A after the draw, with one competing nation yet to be decided ahead of Tonga and the Cook Islands playing off for the right to join Tahiti, Vanuatu and two-time OFC qualifying tournament finalists the Solomon Islands.

Today’s draw for the competition, presented by Alibaba Cloud at the Home of FIFA in Zurich, set up a rematch between the two clubs who also met at the play-off stage four years ago in Al Ain, with a long range Romarinho strike deciding the tie.

Palmeiras, Chelsea, Saudi Arabia’s Al-Hilal, Egypt’s Al Ahly and Mexico’s Monterrey round off the seven participants at the tournament, which was originally scheduled to be held in Japan in December.

The winner of the play-off match between the Navy Blues and Al Jazira on February 3 goes on to meet Al Hilal. Beyond that game lies a semi-final clash with English giants Chelsea.

“The circumstances of our qualification have to be brought into perspective – we’ve been nominated by Oceania Football Confederation thanks to the cooperation of its Member Associations, clubs and council, so it’s important we show both humility and a sense of responsibility in everything we do related to this competition and our presence in it,” Auckland City FC chairperson Ivan Vuksich said.

“The pandemic has smashed the football calendar in Oceania with no international football taking place at age-group or club level since 2019-20. Domestic football has been interrupted and, of course, the OFC Champions League has been cancelled twice.

“I want to express our gratitude as a club to everyone involved in that decision making process whether we get to the UAE or not. This is a highly complex, volatile and dynamic environment which makes logistical planning difficult for everyone.

“This is a changing situation and there are no solid guarantees in a global pandemic where uncertainty prevails. It’s important to keep pushing hard to ensure that we can first attend the event safely, then compete meaningfully and uphold and improve the reputation of football in Oceania and the club scene in New Zealand.”

The 2021 club world champions will be crowned following the final due to take place on February 12.

The draw also saw the unveiling of the official tournament emblem.

With the competition returning to the UAE for the first time since 2018, the emblem brings together natural and cultural elements from the host association’s rich history. The warm multi-coloured hues of the desert and the sun and the lush shades of palm trees come together with historical inspirations from fishing, sailing and pearl diving to form the shape of the tournament’s iconic trophy. The ball crowning the top of the emblem contains elegant Arabic calligraphy meaning “emirates”.