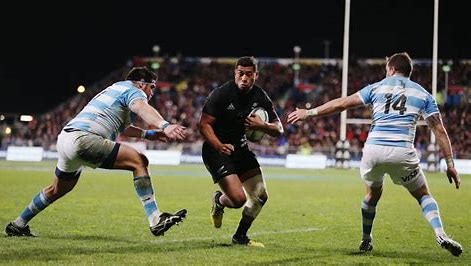 Picture former All Blacks Charles Piutau, Malakai Fekitoa and Vaea Fifita running out for Tonga at the next World Cup.

Then think of Lima Sopoaga, Julian Savea, Victor Vito and Steven Luatua running out for Samoa in France in a couple of years.

In a huge win for Pacific Island rugby, it’s now a reality in wake of World Rugby approving an amendment to its international eligibility rules.

From 01January, World Rugby will permit international playeUnder the revised regulation, the player must stand-down from international rugby for 36 months, must be born in the country they wish to transfer to, or have a parent or grandparent born in said country.

A player can only switch unions once, and each case will be subject to approval by the World Rugby Regulations Committee.

“Great news for all the Pacific Nations. Can’t wait to get going with the brothers. For the people,” Fekitoa posted on social media.

Sopoaga was also chuffed with the news, tagging Piutau, Luatua and Ngani Laumape in a post.rs to transfer once from one union to another, subject to demonstrating a close and credible link via birthright.

Waisake Naholo, Seta Tamanivalu, George Moala, Augustine Pulu, and Francis Saili are among a lengthy list of other former All Blacks who could switch unions from next year.

“Approval of this landmark regulatory change is the culmination of detailed and widespread modelling and consultation across the game,” World Rugby Chairman Sir Bill Beaumont said:

“We have listened to our membership and players and sought to update the regulation recognising the modern professional rugby environment without compromising the integrity of the international game.”

Former Blues playmaker Isa Nacewa, who played two minutes for Fiji at the 2003 World Cup and unsuccessfully appealed for change so he could represent the All Blacks, called it a pivotal moment for Pacific nations ahead of the vote.

All Blacks loose forward Ardie Savea, who recently captained the men in black, has in the past admitted he’d one day “love” to represent Samoa, the country of his heritage.

“Heart and soul, I still love the All Blacks jersey, and what it’s provided to me and my family. “But man, the heart and the soul goes back deeper.

“My Samoan blood goes back thousands of years.”

From 01 January, 2022, in order to transfer from one union to another under the revised Regulation 8 (eligibility), a player will need to achieve the below criteria:

Under the revised Regulation 8 criteria, a player may only change union once and each case will be subject to approval by the World Rugby Regulations Committee to preserve integrity.

After 01 January, 2022, any player who meets the above criteria can apply immediately for a transfer.

The Regulation 8 revisions will also align the “age of majority” across 15s and sevens. All players will now be ‘captured’ at 18 years of age to simplify the Regulation and improve union understanding and compliance.

The benefits of the amendment include:

Simplicity and alignment: transfers are currently permitted in the context of participation in the Olympics in the sevens game. This amendment will create one aligned, simplified process across the game.

Development of emerging nations: the player depth of emerging nations may be improved by permitting players, who have close and credible links to the “emerging union” through birth or ancestry, to “return” to those unions having previously represented another union

Player-focused approach: the process recognised the modern rugby environment, including global player movement, the current ability to capture players by selecting them on the bench, and the desire of some players to transfer having been selected a limited number of times for one union. It also examined the impact of any change on the integrity of the international competition landscape.