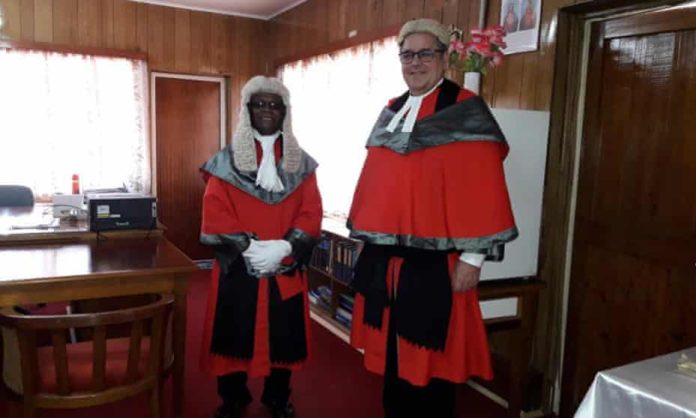 A landmark judgment in the Pacific country of Kiribati has ruled the government’s actions in blocking an Australian, a judge on Kiribati’s high court, from returning to the island were unconstitutional.

When David Lambourne left Kiribati in February 2020 to attend a conference in Australia, he thought it would be a brief and uneventful trip. Instead, the Australian judge, who has been resident of the Pacific nation for over two decades, found himself stranded after Covid-19 hit.

Over the subsequent 21 months, Lambourne has been unable to return home and has become embroiled in a major constitutional controversy.

Over the past year, Kiribati’s government has taken a number of steps to prevent Lambourne from resuming his position in the capital, South Tarawa. The government has attempted to undermine the judge’s life tenure, stopped paying his wages and refused to issue an ongoing work permit or allow him to board a repatriation flight.

Last Thursday, the saga came to head with a landmark judgment from the nation’s chief justice, William Hastings, finding that the government’s actions had been unconstitutional.

The ruling has been hailed as a win for judicial independence in region, amid concerns about institutional decline in several Pacific nations.

“It is important to put this case in context,” said Hastings in his written reasons. “It involves the separation of powers, the rule of law and an independent judiciary, all of which are fundamental constitutional principles.”

Lambourne, Kiribati’s former solicitor-general, was appointed to the high court in 2018, with no term limit specified. After spending most of 2020 in Australia, Lambourne travelled to Fiji to await a seat on one of the repatriation flights operating to Kiribati.

But while in Fiji, Lambourne was told that Kiribati’s government would only issue a work permit to allow him entry if he signed a contract with a backdated three-year term (which would see his appointment end in June). He initially declined, but eventually signed under duress after the government stopped paying his salary and refused to allow him on any of the eight repatriation flights.

Last Thursday the chief justice upheld his colleague’s claim. Hastings held that Lambourne had been appointed for life, and as such the contract and legislation were unconstitutional, and ordered immigration authorities to facilitate Lambourne’s return to the country.

“The high court’s decision is a significant statement of the principles of judicial independence embedded in Kiribati’s constitution,” said Anna Dziedzic, an expert on the Pacific at the University of Hong Kong Faculty of Law. “It upholds constitutional protections of judicial tenure and addresses some of the vulnerabilities of foreign judges to undue executive interference.”

Dziedzic said that the use of foreign judges was commonplace in the Pacific and raised peculiar constitutional concerns. Because non-citizens are subject to local immigration rules, judicial independence can be frustrated by governments misusing immigration powers. In 2014, another Australian, Geoffrey Eames, then chief justice of Nauru, had his visa cancelled and was forced to resign in circumstances Eames described as an abuse of the rule of law.

“While the case is not binding in other countries, it sets out important principles and resolves issues that arise in other Pacific countries that use foreign judges, and as such is a valuable precedent,” Dziedzic added.

In his judgment, the Chief Justice said that he would give the government “the opportunity” to show “good faith” in compliance with the ruling.

Lambourne declined to comment. The case has added political significance because Lambourne’s wife, Tessie Lambourne, is the leader of the opposition in Kiribati’s parliament.

In response to questions from the Guardian, Kiribati’s attorney-general doubled-down on her government’s desire to have Lambourne removed from his post. “The Government is still very keen to correct the appointment,” said Tetiro. “It was never known that it would be for a lifetime … We will work on correcting this appointment following available avenues, either to appeal to the court of appeal or to change the constitution.”

The government has six weeks to approach the court of appeal.