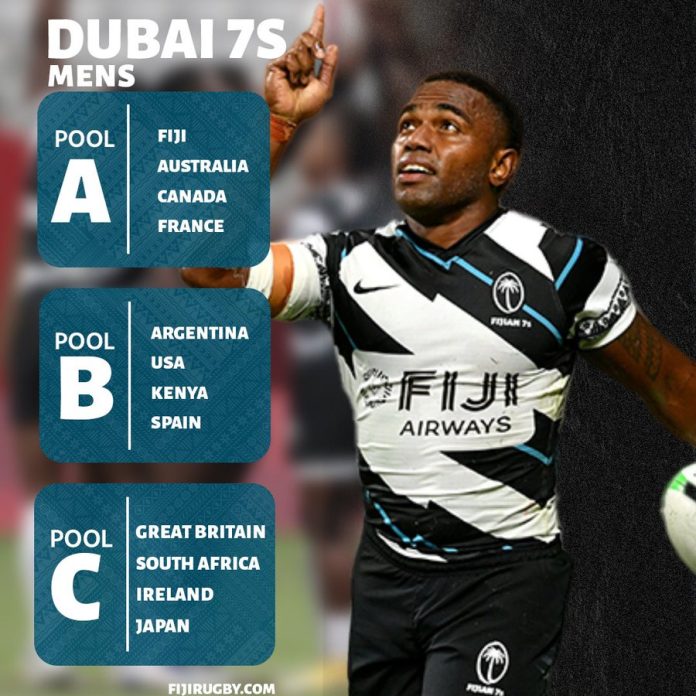 With just 10 days to go until the hotly anticipated kick off of the HSBC World Rugby Sevens Series 2022, the pools and match schedule have been announced for the Emirates Dubai 7s on 26-27 November.

The 12 team men’s competition will follow the Olympic format with three pools of four teams each, while the 10 team women’s event sees the teams divided into two pools of five.

In the men’s event Pool A includes Fiji, fresh from retaining their Olympic title in Tokyo, together with Australia, Canada and France.

Pool B sees Olympic bronze medallists Argentina play Kenya, Spain and the USA. Kenya will arrive in Dubai on good form after reaching the medal podium in both 2021 Series events, with silver in Vancouver and bronze in Edmonton. USA were beaten finalists in Dubai in 2019, when they finished the Series as runners-up.

In Pool C the 2021 Series Champions South Africa will take on Ireland, Great Britain and Japan, who were promoted as HSBC World Rugby Challenger Series champions in 2020. South Africa will be in confident mood following their perfect win record during the pair of HSBC Canada Sevens events in September.

In the women’s event Pool A sees Olympic silver medallists France face Rio 2016 Olympic gold medallists Australia, who were Series runners-up in 2020. The USA, Brazil and Spain complete the line-up and the American’s were bronze medallists the last time Dubai hosted the Series in 2020.

Matches will be played across two pitches and will get under way at 08:48am local time (GMT+4) on Friday 26 November with Australia v USA in a women’s pool A match. Following two full days of action-packed rugby sevens the women’s final will take place in The Sevens Stadium at 18:56 on Saturday 27 November, followed by the men’s final at 19:26 (all times local).

New Zealand’s men’s and women’s teams, who won the respective Series titles in 2020, and Samoa’s men’s team are unable to participate in Dubai due to the challenges of the Covid-19 travel logistics.

Meanwhile due to the ongoing uncertainly surrounding the travel restrictions associated with the global COVID-19 pandemic it has been decided that the Cathay Pacific/HSBC Hong Kong Sevens originally planned to take place on 1-3 April will be rescheduled to 4-6 November 2022, when it will serve as the opening event of the HSBC World Rugby Sevens Series 2023.

Hong Kong will host a second event in the 2023 Series six months later in its traditional April window, doubling the enjoyment of this popular event for fans. World Rugby is considering potential options for a replacement event in the 2022 Series and further information will be shared in due course.

The 2022 Series kicks off as the sport looks to capitalise on a highly successful and impactful Olympic Games played in front of a huge global television audience, which also generated more than 22 million video views and over 100 million social media impressions across digital platforms.

Dubai will host the opening two rounds of the 2022 Series over consecutive weekends with the first played behind closed doors and the second, on 3-4 December, open to the public with a large, noisy and enthusiastic crowd expected to fill the Sevens Stadium and bring energy and excitement to the stands.

The men’s Series continues with North American rounds in Vancouver on 26-27 February and Los Angeles on 5-6 March, followed by Singapore on 9-10 April.

A women’s standalone event will take place in Langford, Canada, on 30 April-1 May before both men’s and women’s teams travel to a new Series venue in Toulouse, France, on 20-22 May where the women’s Series champions will be crowned. The men’s Series concludes with the final event in London on 28-29 May.

Great Britain will participate in the opening two rounds of the Series in Dubai, as part of the standing agreement to play the calendar year 2021, before reverting to compete as national unions for the remainder of the 2022 Series, with England, Scotland and Wales participating in the men’s Series and England in the women’s series.

To take account of this factor and in acknowledgement that not all teams may be able to compete in all events due to the challenges of the global COVID-19 pandemic, a unique Series points scoring system has been introduced for the 2022 Series in the interests of fairness. The system sees the best seven men’s results and four women’s results for each team contribute to their final Series standings. The number of contributing results will increase should a replacement event for Hong Kong be added.

Two men’s and one women’s teams will be relegated from the 2022 Series, to ensure a pathway for teams to be promoted from the HSBC World Rugby Sevens Challenger Series.

Rugby sevens players and fans can look forward to a very busy and exciting year in 2022 with the Series followed by the Commonwealth Games in Birmingham on 29-31 July and concluding with Rugby World Cup Sevens in Cape Town on 9-11 September.

World Rugby Chief Executive Alan Gilpin said: “Following the highly impactful Olympic competition in Tokyo which caught the imagination of new fans around the globe, we are delighted that the HSBC World Rugby Sevens Series is back and are looking forward to what promises to be a superb showcase of this dynamic, skillful and highly entertaining format of the game, kicking off in Dubai where sevens has a great tradition.”

“As we continue to navigate the effects of the global pandemic together with all our stakeholders we must remain agile and adapt to the circumstances. The decision to reschedule the popular event in Hong Kong to later in the year is taken with the best interests of players, teams and fans at heart.”

Emirates Dubai 7s Tournament Director Tom Burwell said: “It’s been over 700 days since the Emirates Dubai 7s last opened our doors to best rugby sevens players in the world and fans from across the globe. We are hugely excited to do so once again for our 51st and 52nd editions with a festival that will be bigger, better, bolder than ever. Across Dubai fans of the festival are excited for the return of the HSBC World Rugby Sevens Series as part of the largest Sports & Entertainment festival in the Middle East.”