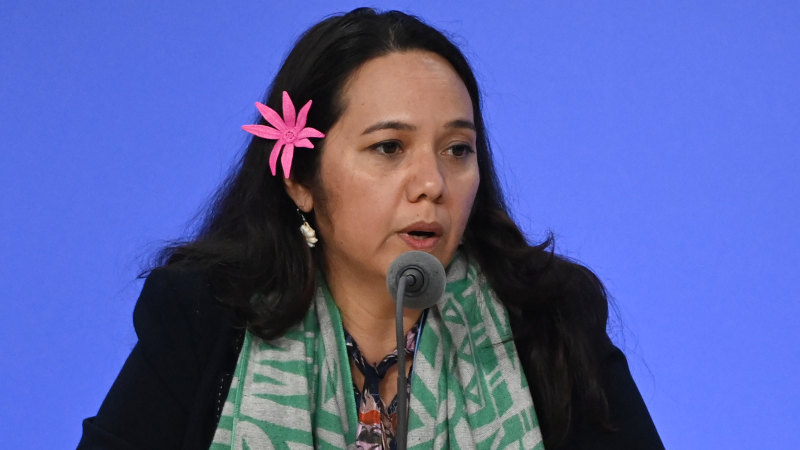 The new assessment report published by Climate Action Tracker Tuesday said the world remains on track for 2.4 degrees of warming by 2100.

If temperatures do rise by an average of 2.7 degrees, the consequences for the earth’s climate have been predicted by the Intergovernmental Panel on Climate Change (IPCC) to be catastrophic.

“Now, at the midpoint of Glasgow, it is clear there is a massive credibility, action and commitment gap that casts a long and dark shadow of doubt over the net-zero goals put forward by more than 140 countries, covering 90 percent of global emissions,” said the report.

Responding to the report, Stege told a press conference in Glasgow, the Marshall Islands will push harder to keep the 1.5 degrees alive.

She said the report showed there must be a focus on 2030 rather than 2050 targets.

“So what does this all mean? “It means we have to focus on increasing the 2030 mitigation ambition. 2030 is the cliff edge, certainly for my country, a small island developing state, but really for the world.”

“As the Marshall Islands envoy, I can’t accept that failure. Failure is accepting that perhaps there isn’t a future for my country.

“It’s not acceptable. Therefore, we will continue to work to make sure that this COP puts in place what needs to be there to keep the door open for 1.5.

“All of these studies are using slightly different assumptions about which pledges they should include,” she said.

COP26 President Alok Sharma told the summit that any warming above 2 degrees would kill off all the world’s coral reefs and expose 2 billion people to extreme heatwaves.

“If temperatures continue to rise we will step through a series of one-way doors, the end destination of which is climate catastrophe,” he said.

Marshall Islands is a member of the High Ambition Coalition (HAC) responsible for altering the language of the Paris Agreement to make its goal to hold global warming to 1.5 degrees celsius, compared to pre-industrial levels.

Marshall Islands Minister of Health Bruce Bilimon said his country will soon have limited options and that no further delay in adapting to climate change is possible.

“No country will avoid its effects and many countries will suffer irreparable damage,” Bilimon said.

“We must not only stay within the 1.5 degrees (Celsius) limit in order to survive but prepare to survive the impacts associated with the increase

“We will be left with limited options,” he told the UN Climate Summit.

New Zealand Minister for Climate Change Andrew Shaw said that it’s aiming to get up to speed with climate commitments.

He said it is about actually making a great many changes, large and small, but together will add up to a better, cleaner future.

“Our upgraded, nationally determined contribution brings New Zealand up to speed with the commitments that others have made,” Shaw said.

“It came off the back of a fourfold increase in the contribution that New Zealand will make to the US$100 billion climate finance promise that we’ve all made,” he added.

As the final phase of negotiation underway in Glasgow, differences are appearing between countries that want tougher action to force countries to revise their NDCs annually if they are not in line with 1.5C, and others wanting to keep to the Paris timetable of five-yearly revisions.

Pacific calls for dedicated funding facility for loss and damage