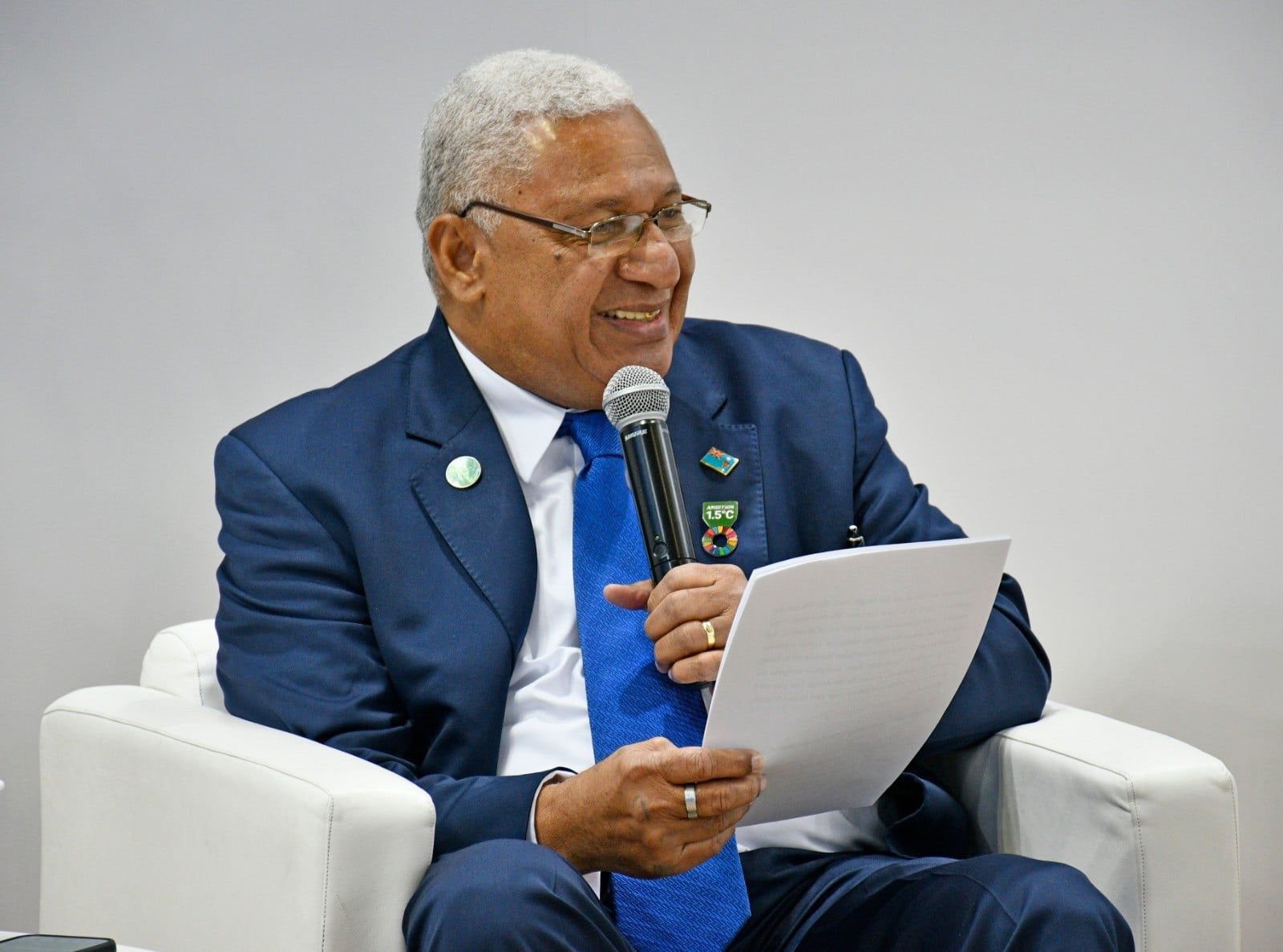 The link between the ocean and climate is vital for survival of this Blue Planet, says Pacific Ocean Commissioner and Forum Secretary General Henry Puna.

At the UN Ocean Decade event by UNESCO’s Intergovernmental Oceanographic Commission on Wednesday, Puna gave a timely reminder that the “Decade of Ocean Science is one of our best chances, to save the ocean.”

“It is our last collective opportunity to work together, to learn more and innovate more, now that the science confirms what people of the Ocean know: that life below water is deeply connected to life above it.”

“This is exactly what I hope we can achieve from this decade of Ocean Science – an ocean science revolution, which is fuelled by data and knowledge, to inform sound policy decision making.

“And when I say knowledge, I am saying it in the context of indigenous, Ocean-driven traditional knowledge. The science of reading skies and oceans in our rich sea-faring culture. The signs and symbols of our living Ocean speaking to life on land.

“This must not be alienated in favour of new scientific ideas, rather, I believe, that there is great opportunity in the nexus between science and traditional knowledge,” said Puna.

He said the decade before us must absolutely inspire resourcing and action within the UNFCCC to deliver on the Oceans-Climate Nexus.

“For it is the Oceans-Climate nexus where our sea of islands truly leads the pathway to a 1.5 future.

“The Ocean represents our collective identity as the Blue Pacific; it defines our culture; our relationships; and how we view the science.

“The ways we know our world may not fit the science. We need to address that,” SG Puna said.

Puna also said that he was heartened by the efforts of Pacific negotiators at the United Nations in New York.

“They have fought to ensure the new instrument on Biodiversity of Areas Beyond National Jurisdiction (BBNJ), recognises the use of traditional knowledge alongside modern science.

He said for decades now, the Pacific has been at the forefront of the Ocean agenda, globally and it will frame the Blue Pacific’s Strategy towards 2050.

“We live in times where the old maps of the five Oceans must only embolden us to act for the future of our one Blue Ocean, for this, our one Blue Planet.

“Our Blue Pacific continent has been galvanised by that mandate to put place globally pioneering political declarations and facilities, including the ground-breaking Declaration on preserving Maritime Zones in the face of climate-change related sea level rise.

“The innovative contextualised regionally designed Pacific Resilience Facility and the full support of our political leadership on Ocean Governance.

“We are amongst some of the most diverse and distinct nations on the planet. But the level of our common unity on Oceans is undeniable and it’s working. Through collective strength, we will continue to stand for an active and strong Oceans-Climate nexus within the COP. We in the Pacific will be counting on you to stand with us, support us and work with us to make that happen.

“Our message is simple – let’s work together to restore the health of our Ocean. Let’s grasp the opportunity of this decade of Ocean Science to build our knowledge, and to inspire innovative solutions to our current challenges.

“Indeed, this is no longer a mere aspiration, but an immediate necessity — and it will only be possible through ambitious and innovative action,” said SG Puna.

Bainimarama said the health of our ocean will determine the quality of our future and that of our descendants.

“My friends, as ocean leaders, we speak for the ocean. We are its defenders and we must defend it as seriously as we defend our citizens,” he said.

“Fiji has fought at these negotiations to engrain the Ocean Pathway into the processes of the UNFCCC. Now we must decide where that pathway leads.

“For the sake of the reefs, ocean, and the general habitability of the planet, we must cut carbon emissions. As that happens, we have to do the work of rebuilding the resilience of our reefs and Fiji is open to partnerships to ensure that we pass our reefs on to coming generations.

Bainimarama said Fiji has partnered with the Green Climate Fund, the Global Fund for Coral Reefs, the Global Environment Facility, the WWF, the Bezos Earth Fund, and other multilateral, bilateral, philanthropic and private sector partners to help meet its commitment to sustainably manage all 1.3 square million kilometres of Fiji’s ocean, with 30 percent declared as marine protected areas.

“Fiji’s reefs today are properly marked so they can be easily navigated. We rely on hydrographic technology to keep vessels safe at sea. Our great Sea Reef-the third longest reef system in the southern hemisphere and the home of half our known reef fish and three-quarters of our coral-is under a regime of sustainable management,” he said.

“Today’s teenagers in Fiji are protecting our reefs-inventing plastic alternatives, attending UN conferences, and protesting climate inaction. If a child in Fiji can do it, leaders of the world’s most powerful companies and countries have no excuse.

“The lesson my life at sea has taught me is this: We can’t be perfect but that isn’t an excuse for inaction today. Let’s make a promise to each other to leave the world better than we left it. Admit to our mistakes, learn from them and grow alongside the science. By doing so, you can be the change that you want to see in the world, and you can help steer us to a brighter, bluer future.”

UNSG’s Special Envoy on Ocean, Ambassador Thomson said it was important that we keep our children and grandchildren in mind when discussing crucial matters including ocean- climate nexus.

He is the grandfather to Grace Mirabelle, Poppy and Rose. In reminding himself that his actions today would contribute to the future they would have, he wore a special custom made card that spelled out their names.

Ambassador Thomson said apart from trying to get ocean into the UNFCCC process, the focus should also be towards the second UN Ocean Conference in Lisbon, Portugal from 27 June to 01 July. And that focus must be rooted in the actions dedicated towards the UN Decade for Ocean Science.