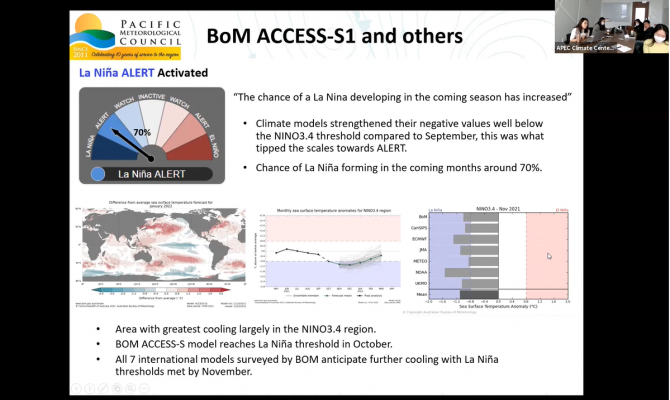 The Pacific is likely to experience a rare occurrence of what is called a double dip La Niña in the coming months, Climate models and predictions tools used by Pacific National Meteorological and Hydrological services (NMHSs) show.

The prediction, based on anomalies identified by the climate models and tools, was revealed in a statement on the El Niño-Southern Oscillation (ENSO), presented during the Ninth Pacific Islands Climate Outlook Forum (PICOF-9), held last week.

La Niña is the name given to the phenomenon where the trade winds become stronger, enhancing the warm pool in the western Pacific and causing the sea surface temperatures in the Central and Eastern Pacific to become cooler with above normal rainfall in the west compared to eastern Pacific.

As a result, Pacific Island countries in the Central Pacific region such as Kiribati, Nauru and Tuvalu may experience below normal rainfall during this period, while islands in the South West Pacific will experience higher than normal rainfall, such as Fiji, Niue, Palau, Papua New Guinea, Samoa, Solomon Islands, Tonga and Vanuatu.

According to the Secretariat of the Pacific Regional Environment Programme’s (SPREP) Meteorology and Climatology Adviser, Salesa Nihmei, a double-dip La Niña episode occurs when two La Niña events develop one after the other.

“Usually when a La Niña occurs, it takes between 3-7 years before another one starts to develop. Often La Niña is followed by a neutral phase or an El Niño. However, the Pacific experienced a La Niña event towards the end of last year, and we are once again observing the likely development of another. This is why it’s referred to as a double-dip La Niña episode.”

La Niña is part of the El Niño Southern Oscillation (ENSO) which is a climate driver that influences rainfall, temperature, and sea level patterns across the Pacific. ENSO is a slow onset event, whereby the impacts are not felt immediately by Pacific Islands, but gradually over time.

This is unlike rapid onset events such as tropical cyclones, whereby the impacts are felt as soon as the event occurs.

PICOF-9 brings together representatives of Pacific NMHSs to discuss the climate outlook for the Pacific over the next six months and to reflect on the outlook of the last six months since the previous PICOF, which was held in April 2021.

The virtual PICOF 9 was attended by over 150 participants from the Pacific and around the world.

The PICOF-9 will therefore inform and prepare Pacific NMHSs and communities of the possibility of a La Niña event, so they can begin to prepare their respective countries on how best to respond when a La Niña event is officially declared.

Low-lying atoll nations such as Kiribati, Nauru, Tuvalu and northern Cook Islands, with little supply of freshwater, will be amongst the countries that usually experience below normal rainfall during a La Niña event. They will need to prepare by ensuring they have sufficient supplies of freshwater stocked up before it occurs.

On the flip side, countries in the western Pacific such as Palau, PNG, Solomon Islands, Vanuatu, Fiji, Tonga, Samoa, Niue and southern Cook Islands will experience a lot of rainfall in the coming months especially during the early part of the wet season. Excessive rainfall can also cause flooding and damages to infrastructure and Energy supply.

The PICOFs are organised through a collaborative partnership between SPREP and WMO, with technical support provided by the Australian Bureau of Meteorology (BOM), National Institute of Water and Atmospheric Research (NIWA), the Pacific Community (SPC), Meteo France, and National Oceanic and Atmospheric Administration (NOAA) as members of the Pacific Regional Climate Network Node for Long-Range Forecasting, together with the Pacific Islands Climate Services Panel of the Pacific Meteorological Council.