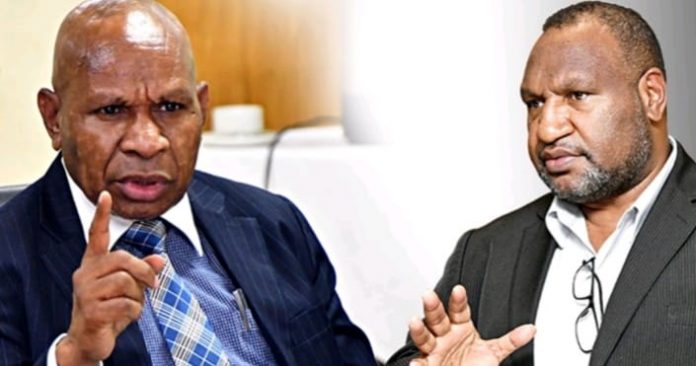 Papua New Guinea Speaker of Parliament Jacob Pomat’s suggestion that the 2022 General Elections be deferred by one year is both dangerous and wrong and is a direct threat to democracy and the Constitution, the Opposition says.

The Opposition, in a statement, said the call is dangerous because given the normal 70 percent attrition rate of Members of Parliament losing their seats at every elections, many sitting MPs will be tempted to support a deferment of the elections in order to enjoy the perks and privileges of office one year longer.

“This will be in total breach of the Constitution on the term of Member of Parliament and on the calling of Parliament,” statement read.

“An amendment to the National Constitution requires three separate sittings of Parliament of two months apart and therefore cannot be safely done in the time we have.

“Even if an amendment was made somehow, the precedence set for repeated such acts in future will make reduce the Parliament to a rubber stamp, render the Constitution ineffective and circumvent the rule of Law so completely so as to make it useless and laughable.”

Sir Julius Chan, one of our founding fathers and former two time Prime Minister has said: ‘No excuse can be a good excuse for the deferment of elections when the people must elect their leaders and choose their government’.

“I agree totally with Sir Julius. Nothing else is more important or fundamental to this country than the conduct of the National General Elections in accordance with our National Constitution.

“As this charade goes on I sense that that the entire drama is being orchestrated by Government and it has been going on for a long time.

“Have the Speaker call for a deferment of elections by one year. This ought to have been raised on the floor of Parliament which is the right and proper forum but it is broached immediately after the Parliament rises, as if to test the waters.

“The PM quickly (perhaps too quickly) says there is no such law.

He said a National Census has been deferred, against the law. The Common Roll update is not yet done just seven months before the National General Elections,” Opposition leader Belden Namah said.

He said under the law a completed Common Roll will need to be publicised and the public given three months for public scrutiny, be checked and verified before finalization.

Namah said money has not been released yet for all these important activities so that, despite the Prime Minister’s public reassurances about legal niceties and funding being made available, his actions give the opposite view, that of an executive government which seems to have been working deliberately for a long time towards an inevitable deferment of the elections and illegally gaining extra time in office.

Meanwhile, the Covid-19 pandemic should not be used as an excuse for deferral of the National General Elections, says Institute of National Affairs Executive Director Paul Barker.

Barker said that “although it will be more challenging for the electoral management and law enforcement agencies to conduct an election at this stage, including to avoid large and unsafe public gatherings during the campaigning period, that is still not adequate reason to defer the election and undermine PNG’s five year democratic cycle, which is a long term for a legislature in any country.

“There is certainly a health crisis in PNG at the moment related to the Covid-19 pandemic, and it’s also true that the Government has financial constraints and has been slow in releasing funding to the Electoral Commission for them to progress much of the preparatory work, including online systems for the 2022 National Election. However, PNG has conducted by-elections during this pandemic period, and many countries around the world have conducted national elections.

“It’s true that if and where large political gatherings occur during campaigning or voting periods these can turn into Covid-19 super-spreader events and should be restrained.

“But Fiji managed to vaccinate 80 percent of its population in a few months, when the vaccine became accessible and because they had the motive, of restoring their economy, with its high dependence upon tourism. PNG also needs to restore its economy, as well as safeguard its population, by ramping up it vaccination.”

Barker said that “a lot of international funding and support have been provided to improve health care provision and to roll out the vaccines, and it’s somewhat hard to see where all these funds and efforts have gone, with accessibility having been limited and often opaque, and the roll out very slow, with vaccination rates remaining almost uniquely low by global standards”.

“It’s recognised that lack of understanding has been widespread after years of weak public services, including health, education and communications services, and vaccine hesitancy have been almost uniquely high, for various reasons.

“Unfortunately, it often takes the immediacy of higher cases and mortality, for the public to respond and recognise the need for the protection from more severe illness that the vaccine provides, and vaccination rates are rising, quite substantially in some of the main impacted centres and districts. This requires that the distribution network is up to scratch and that vaccine is readily available in sufficient quantities to meet demand.”

Barker said that what was needed is to crank up the awareness and vaccination programme, working with the churches and other partners, to raise the safeguards and reduce Covid-19 transmission, to progressively fund the EC and provide the needed operational support for the commission and law enforcement agencies, including applying the outstanding reforms for more transparent and accountable election operations and preparation of clear rules for conduct of a safe election process, which minimise risks, restricting major election gatherings, at least until high vaccination rates have been achieved, and restraining other spreader events, such as extensive food distribution, which are widely restricted anyway as inappropriate electoral inducements.

“One certainly does not want to let an Election process to worsen the pandemic and its impact in PNG, however, at this stage the pandemic should not be used as an excuse for deferral, but rather should be an added stimulus to improve the awareness and Covid prevention and protection program, particularly vaccination rollout.”

Barker also said that there were no provisions in the Constitution for an extension to the term of Parliament except, Section 246.

“But the Covid-19 pandemic should not be used as an excuse for deferral of the National General Elections,” he said.