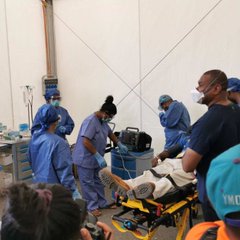 The Minister for Health in Papua New Guinea, Jelta Wong, says work has started on a 500-bed field hospital in Port Moresby, as the country’s COVID-19 outbreak continues to escalate.

The latest status report says another 288 cases have been recorded, taking the total to almost 25,400, with more than 300 deaths.

Less than two percent of the population has had at least one dose of a COVID-19 vaccine and doctors in the capital have been prescribing a worm treatment that the World Health Organisation says is dangerous.

Administrators at Port Moresby General Hospital say it is over capacity and in crisis, with 68 people having died there during the past month.

The Health Minister says the government is working to create more capacity and is willing to ask Australia for assistance to create another field hospital if needed.

“If worse comes to worst we will with the help of Australia we will build a camp a basic hospital camp in another stadium in the city,” he said.

Meanwhile, at the country’s largest hospital the Head of Obstetrics and Gynaecology at Port Moresby General Hospital, Dr Glen Mola, says they’re dealing with one to two deaths a day in the maternity ward.

It’s a situation that’s only adding to the alarm of health officials, as the number of COVID-19 cases continues to climb and hospitals are collapsing under the burden.

Dr Mary Bagita is the Coordinator for Obstetrics and Gynecology at Port Moresby General and she says while she and her team were expecting a surge she is still nervous about the growing cases.

“Many of us were mentally and physically prepared it’s been quite overwhelming and quite distressing also,” she said.

“We’ve had a much higher number of women testing positive this time around and women who have come [to the maternity ward] with more severe symptoms,” she said.

Meanwhile, outside the Port Moresby General Hospital morgue in NCD Wednesday, stood a family of five girls and their mum, their eyes puffed and red from all the crying, looking on as the body of their father lay in the over-crowded morgue.

They were helping their mother to beg for their father’s body to be taken to their home but the PMGH repeatedly reminded them, the law does not allow the body of their father to be taken away.

A few metres away, a woman was wailing uncontrollably, lying over a dead body, oblivious to all the COVID-19 restrictions and fears.

Outside, people were milling about, some with face masks, others without. They all had one purpose and that was to mourn for the dead. As it stands, the morgue has over 300 bodies crammed in its already tight space.

Due to the crowded state of the mortuary, the hospital invited the media to show the dire situation it is in right now as it grapples with the administrative requirements to get rid of the bodies to make space as more are being taken in every day since the third, most deadly wave of COVID-19 hit the city in early September.

“My husband died of COVID, Eldest is 19, the youngest is about 11, and we have been married for more than 20 years,” wife and mother Nora Wara said as her children and her waited patiently as the body of their father, the late John Nongi, from Kimbe, a soldier at Murray Barracks, who served more than 30 years, was wheeled into the PMGH morgue.

PMGH is now faced with another dilemma –– this time over bodies that urgently require money and paper work to be completed to pave the way for their burial.

The deceased include a staggering 300 plus bodies with many of them COVID-19 related cases and the hospital does not know where it will put the new bodies that are coming out from its COVID-19 wards in escalating numbers daily. PMGH director medical services

Dr Kone Sobi said right now the hospital is in the midst of the spike in COVID-19 cases and singles out that there is also a crisis in the morgue – it is full and there is no more space to put the ones that will be pronounced death in the coming days.

“All container refrigerators are full, and they even have used the stock container to pile the bodies.

“We are not providing the best to the deceased, but it is what it is, a mass burial will come at a high cost,” he said…

The National Control Centre admitted that all major hospitals in the country were barely coping as they respond to the rising number of COVID-19 cases in the country.

“We are at the moment barely managing with the existing load. There are surges occurring in all the major centres,’’ Dr Gary Nou, team leader for Emergency Medical Team at the NCC and NCC Clinical lead Dr Scotty Kandelyo, who is also the country’s Deputy Chief Emergency Controller for the Highlands and Mamose regions said in a statement.

They said in the National Capital District, the COVID-19 isolation facilities at Gerehu General Hospital and Taurama Acquatic Centre were also full to capacity.

“Patients are lying everywhere. The situation is dire,’’ the doctors said.

They said there were so many patients, not just those seeking help for COVID-19 but also other illnesses and the situation with COVID-19 was overwhelming for the health workers.

The NCC EMT was currently working on bringing into the country medical teams to help the already exhausted health workers in different parts of the country.

On Saturday, five members of the Australian Medical Assistance Teams (AUSMAT) arrived in Port Moresby to do the groundwork for the engagement of their members. AusMat meets the entire cost of their engagement with no financial help coming from the government of PNG.

Dr Nou said the other team, UK Medical Team, is also sending a team and is currently working on their visas.

Meanwhile, Deputy Controller of the National Pandemic Response Dr Daoni Esorom has also reiterated for everyone to follow the Niupela Pasin including wearing face masks in public spaces.

“I cannot but continue to say this that unless we all co-operate, the virus will continue to spread in our communities. We’ve lost so many people and we cannot continue like this. Please listen and follow instructions,” he said.

Dr Esorom also warned that since the Christmas holiday season was approaching, people will travel to their home villages where probability of transmitting the virus was imminent.

He urged the public to be mindful of the pandemic and take extra precautions when travelling and being around in the communities.