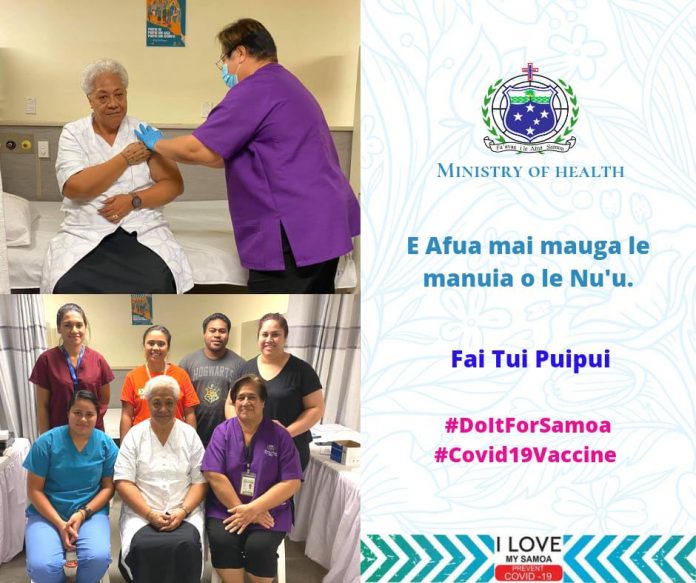 Fiame said as of Wednesday last week, close to 95 percent of the eligible population have received their first doses of the Astra Zeneca vaccine, and close to 60 percent have completed their second doses.

“I want to encourage our people to continue their support for the Government’s COVID-19 vaccination programme spearheaded by the Ministry of Health to ensure our country reaches herd immunity,” says Prime Minister Mata’afa.

“The aim is to meet the target percentage of vaccinated people by the end of November to ensure that our country continues to be COVID free.”

Mata’afa also acknowledged the vaccination campaign rolled out by the National Emergency Operation Centre and the Ministry of Health last month.

“The Government wants to acknowledge the work by the vaccination teams and also the support by heads of Government Ministries and Corporations and everyone who contributed to this campaign.”

Health’s Director General, Leausa Dr. Take Naseri in the NEOC Press Conference last Friday said 115,274 of the eligible population of about 122,000 have received their first doses of the Astra Zeneca vaccine, and 68,343 have completed their second doses since the vaccination roll out started in April this year.

“The concern is, if we accumulate the number of eligible people who have already done their second doses, there are over 6,000 who haven’t received their second doses,” said Leausa who urged the public to visit any fixed site or district hospital to receive their vaccinations.

“Our fixed sites and district hospitals are still open for conducting your second doses from Monday to Friday before the last batch of our vaccine expires on the 30th of November.

“This is why we are urging the public to make an effort to receive your vaccinations.”

Leausa also referred to the situation in Fiji and the United States where the majority of people who died because of COVID-19 are unvaccinated.

“There was also a death reported from New Zealand which confirmed that the deceased was unvaccinated.
“You have to complete your two doses and also understand that this vaccine is our protection from the pandemic.

“I call on the over 6,000 eligible population to please get vaccinated.”

The first flight from Australia on Monday did not have passengers since it is dedicated to transport seasonal workers to Down Under.

The second flight scheduled for later in the week will include Samoans returning home and will depart with more Samoan seasonal workers recruited by businesses and farms in Australia.

There are two planned repatriation flights originating from New Zealand during the month and these flights are subject to change depending on unforeseen circumstances, NEOC Chairman and Secretary to Cabinet Agafili Tomaimanō Shem Leo has revealed.

He told a press conference last week that Cabinet is also monitoring the situation in Fiji with regular reports from Samoa’s Resident High Commissioner to Fiji base in Suva, Ali’ioaiga Feturi Elisaia.

And if warranted Samoan students and national employed by regional offices in Fiji will be repatriated home.

Agafili also reconfirmed that the Samoan student attending USP has fully recovered from COVID-19 and his condition is being monitored by health officials and the Resident High Commissioner.

As of Friday, the so called Travel Bubble with New Zealand is a myth, Agafili told the Press noting that the misinformation may have been prompted from the One Way Quarantine arrangement signed by Prime Minister Fiame Naomi Mataafa and her New Zealand counterpart Prime Minister Jacinda Ardern.

That arrangement is exclusively for Samoan RSE workers heading to New Zealand for employment and there are plans to extend the One Way Quarantine agreement to resident medical patients needing specialised treatment in New Zealand funded by Government and for scholarship students.

As for all returning RSE workers, Agafili reiterated that they will still be required to the compulsory 14 day quarantine upon arrival before they are released to go home.