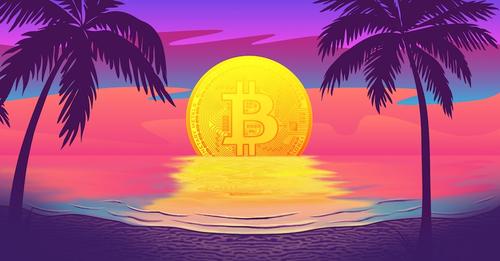 It was beneath the thatched roof of a traditional meeting house in Pango village, Vanuatu, where many residents first learned about blockchain — the technology underpinning cryptocurrencies like Bitcoin.

A team from Melbourne start-up Sempo, along with members of NGO Oxfam, were training villagers and vendors how to use Unblocked Cash, a pilot project funded in part by the Australian government.

The system promised to “revolutionise humanitarian aid” by using a cryptocurrency pegged to the US dollar — also called a stablecoin — to send money from donors directly to tap-and-pay cards given to participants.

Not everyone who attended the training understood how blockchain or cryptocurrency worked, but many were keen to sign up to receive 10,000 Vatu (AUD$122) in digital cash.

The money was loaded onto tap-and-pay cards each month, which individuals could use in participating stores.

Oxfam isn’t alone in testing blockchain projects in the Pacific — a region which has some of the poorest internet connectivity in the world.

Over the past five years, international NGOs, Silicon Valley entrepreneurs, Pacific governments and local programmers have developed world-first blockchain projects in the region.

But critics fear the Pacific region is being used as a testing ground for experimental technology.

Oxfam’s blockchain project would go on to register 35,000 people in the Pacific region and has given more than US$2 million (AUD$2.7 million) to participants.

The transactions were tracked using a blockchain platform called Ethereum, allowing Oxfam to know exactly when, where and how the money is spent.

“When they started, they selected single mothers, widows and widowers, and people with a disability,” said a local store owner who attended the session in 2019.

“Each person was entitled to one card, which had money inside it, and whatever they wanted inside my store they could then pay for it with their card.”

Evelyn James, a participant from Port Vila, said receiving the money after signing up was a great benefit.

“Just knowing that you have money, where you can go and buy something, it makes us really happy,” she said.

The team behind the project say it is revolutionary because, thanks to blockchain, cardholders don’t need a bank account to receive donations.

“There is a lot of lack of access in the Pacific right now, there’s a high unbanked population … So there’s a lot of need for products like these,” said Tristan Cole, the co-founder of Sempo who helped design the programme.

Jesse Gartner, Oxfam’s cash transfer coordinator in Vanuatu, said the program pointed to the vast potential of blockchain technology in the Pacific.

“Vanuatu is on the cutting edge of using this technology and it has allowed areas with very limited technological capacity to participate in a digital economy,” he said.

Blockchain products on the rise

Put simply, blockchain is a digital public record where data is stored as “blocks” that are added to “chains” of information.

The revolutionary aspect of blockchain is that there is no need for a middleman or institution to hold the information — instead, the entire blockchain is stored on thousands of computers around the world.

If anyone wants to add a new block of data, all those computers need to verify the block and add it to the chain.

The technology is commonly used for cryptocurrencies, where digital transactions are verified, recorded and added to the public record without the need for a central bank.

The technology has spawned countless products in the Pacific – Oxfam uses blockchain to track donations on its Unblocked Cash program in real time, while Fiji and Asian Development Bank have developed a smart contract system to monitor the sale of indigenous land.

A Fijian company uses blockchain technology to monitor fisheries around the Pacific.

Tuvalu is developing a “national digital ledger” using blockchain, so that government services can be accessed on a transparent online system.

The government also hopes to develop a blockchain digital payment system so its citizens can conveniently shop online.

Tenanoia Simona, who heads the digital ledger project from Tuvalu’s Ministry of Justice, Communications and Foreign Affairs, said their intention was to “leapfrog Tuvalu into the digital space”.

“The idea of using blockchain technology is to ensure resilience, transparency, integrity of government services,” she said.

Jessica Marinaccio from the Ministry of Justice, who is also involved in the project, said it was quicker and cheaper to test blockchain technology in smaller Pacific nations than larger countries like Australia.

“It kind of allows Tuvalu and places like the Marshall Islands, which have small populations, to really push themselves farther ahead in terms of technology.”

Tuvalu hopes to soon offer a tender for a company to help develop the blockchain system for its government.

But for critics, the desire to test the technology in Pacific Islands is a cause for concern.

Olivier Jutel, from the University of Otago in New Zealand, has been studying the rise of cryptocurrency in the Pacific.

He said blockchain projects were often a form of “backdoor privatisation”, and an opportunity for foreign companies to test their products on Pacific populations.

Many Pacific countries have laws against cryptocurrency, which can hinder the aspirations of blockchain innovators.

Though participants pay for their groceries using digital tokens given to them by Oxfam, the shops are reimbursed by Oxfam using a regular bank transfer.

As a result, store owners do need a bank account to be part of Unblocked Cash, which has meant some local businesses in Vanuatu’s villages can’t take part.

A shop owner in Pango village, who did not want to be named out of fear of being singled out by the community, said they weren’t able to run their small store while waiting for Oxfam’s reimbursements.

They were also upset that larger businesses in the city were invited to take part and decided to leave the programme after a couple of months.

“They included all wholesale stores and hardware stores in town as well. So I found that I didn’t have many customers,” the store owner said.

“If you’re thinking about helping a local shop owner in the village, why would you open this out in town?”

Freda Willy, another participant of the project, said she was grateful for the money but wished cheaper, local stores would also accept her card.

“There’s only one [participating] vendor at the market. You have to go when she’s there or you can’t buy the food,” she said.

Oxfam has said only 9 per cent of the 352 vendors in the project were large supermarkets, and 54 per cent were community stores or fresh food sellers.

Gartner from Oxfam said the feedback from both vendors and cardholders had been overwhelmingly positive, but his team was working to better support local businesses.

The future of Pacific cryptocurrency

While some countries face regulatory hurdles, others have tried to implement laws to develop cryptocurrency within the Pacific.

Israeli entrepreneur Barak Ben-Ezer has developed a cryptocurrency for the Marshall Islands called the Sovereign, or SOV.

In 2018, the country passed a law to make the cryptocurrency its national legal tender.

The project has since stalled, but Ben-Ezer remains optimistic.

In Tonga, MP Lord Fusitu’a is drafting a bill to make Bitcoin a legal tender in the Pacific nation, like what was done in El Salvador last month.

He believed “developing and emerging markets” like those in the Pacific stand to benefit the most from cryptocurrency, since they relied so heavily on international banks and the associated fees.

In Tonga for example, 40 percent of its national GDP comes from people abroad sending money back to family, and Lord Fusitu’a said by using cryptocurrency like Bitcoin instead of traditional banks, those remittances could be cheaper and faster.

But despite his support for Bitcoin, Lord Fusitu’a said he was concerned some people in the Pacific might be tempted to support unlisted alt-coins or speculative blockchain projects.

“If you put your life savings into something that’s not on that [regulated] list, that’s gone,” he said.

Concerns around cryptocurrency aside, many believe the underlying blockchain technology holds the key to accelerating development in the region.

“Blockchain is here. It’s not going away,” he said.

After 865 days, Samoa reopens to tourists