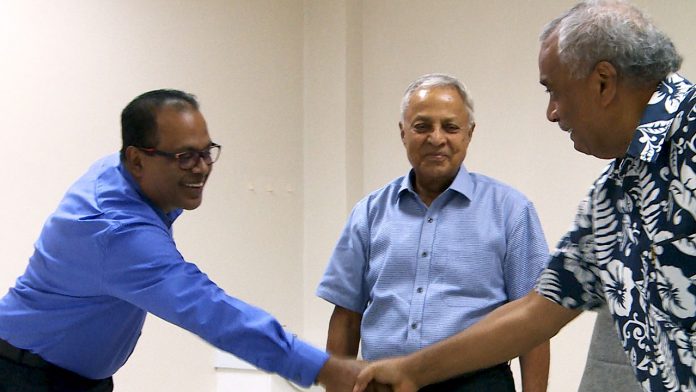 The Fiji Labour Party, Freedom Alliance and Unity Fiji will merge for the 2022 general elections.

The three political leaders in a joint statement said work towards uniting the Opposition parties for the 2022 general elections have started.

The three political leaders said this is in response to the growing call from the people for a united front to fight the next elections.

“We have entered into a memorandum of understanding which establishes a coordinating centre to spearhead the work,” he said.

“Our call for unity is about our willingness to reach an agreement by consensus for the greater good of the people and the nation.

“It is their call, and the understanding of the party leaders that have laid the foundation for unity, with an invitation to the leaders of the other opposition parties to come together as one.

“We fully recognise the importance of unity amongst the Opposition parties. The benefits of a united front are overwhelming and a sure recipe for victory,” he said.

The three political said they truly believe that the opposition parties can and must come together for the national interest.

“A united front is the only way that can guarantee that there will be a new government after the 2022 elections to restore peace, unity, freedoms and prosperity to our people,” he said.

“It is an accepted norm that political parties may represent different ideologies and philosophies but they all must be centred on improving the living standards of our people.

“Therefore, we truly believe that the opposition parties can and must work together in this hour of need.

“We are confident that this initiative will motivate the other Opposition parties to rally together for the sake of our children and grandchildren,” he said.

The three political parties said the coordinating centre will consult widely to help the opposition parties design a framework for unity that, we believe, will be acceptable to all parties.

Still ‘not clear’ whether Omicron COVID variant is more transmissible or...