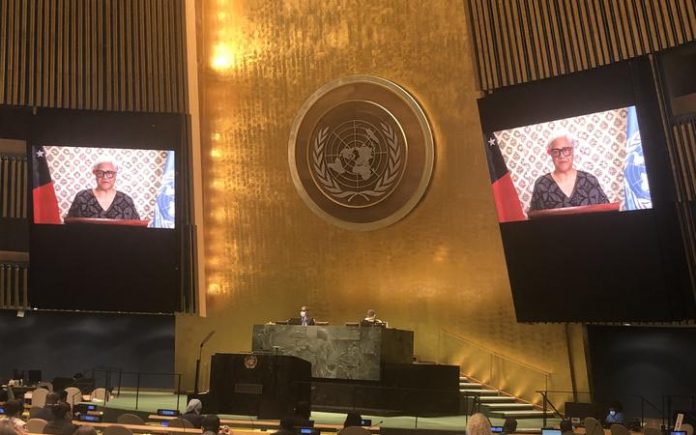 In her address at the United Nations General Assembly (UNGA), Samoan Prime Minister Fiame Naomi Mata’afa called for more climate action to fight the impacts of climate change in the region.

Mata’afa said the real challenge for Pacific communities is about action for survival.

“We all need to shoulder our responsibilities and play our part,” Mata’afa said in her address to UNGA.

“The big polluters and emitters need to demonstrate more commitment and leadership.

“The increase and frequency of natural disasters continue to devastate countless lives.

She had then extended Samoa’s deep condolences to Haiti for the lives lost and the immeasurable devastation wrought by the earthquake.

“We fully support the resolution on assistance to Haiti in the aftermath of the recent disasters,” Mata’afa said.

She explained that these environmental threats can only worsen and that the latest report on climate change from the Intergovernmental Panel on Climate Change (IPCC) shows that the global greenhouse gas emissions must be halved in the next decade and reach net-zero emissions by mid-century if the promise of the 1.5 degree celsius is to remain within reach.

She further stated that if it is to drive down global emissions such as investing in clean and affordable energy, moving towards green resilient economies, tackling deforestation, ending coal power and focusing all efforts to protect nature must take precedence.

“Such solutions must be complemented by ensuring climate finance for frontline countries and utilising the advanced scientific knowledge and superior technology available,” Mata’afa said.

“The upcoming COP in Glasgow is our point of no return. Our commitment from there onwards will determine the future trajectory for our planet, can we avoid a climate catastrophe in our children’s lifetime”

Mata’afa had then explained that the ocean is core to our pacific way of life, tied explicitly to our need for climate actions in our custodianship of the world’s oceans.

“As the blue pacific continent, our collective priority is to maintain the health of the ocean as well as the sustainable management of our vast and biodiverse ocean,” she said.

“A new 2050 strategy for the blue Pacific continent will reinforce the prioritisation of ocean and climate change considerations in all policies and plants.

“A shared ocean means shared responsibility and benefits for our environment, economies, and communities.

“Our marine protection goals in our first ocean strategy are aligned to the blue leaders, 30 by 30 campaign calling for protecting 30 per cent of our global ocean by 2030.”

Mata’afa had also stated that Samoa continues to prioritise both marine and terrestrial ecosystems restoration.

She added that with the United Nations Convention on Climate Change (UNFCCC) COP26, 2021 is a critical year for aligning action to tackle the climate emergency and addressing the threat posed by biodiversity loss.

“Securing our maritime zones against the threat of climate change-related sea-level rise and preserving our existing rights and entitlements from maritime zones is of fundamental importance to our Pacific region,” she said.

“Therefore the leaders of the Pacific Islands Forum at their 51st meeting this year endorsed the declaration on preserving maritime zones in the face of climate change-related sea-level rise.

“UN reports claim that every year more than 8 million tons of plastics end up in the ocean.”

She said if this trend continues by 2050 our ocean will have more plastics than fish.

“Pacific [Small Island Developing States] contribute less than 1.3 per cent of the mismanaged plastics in the world’s ocean yet are one of the main recipients of plastics pollution and its impacts,” she said.

“Samoa fully supports the ministerial conference on marine and plastic pollution aimed at agreeing on a common global approach to confront the scourge of marine plastics,” she said.