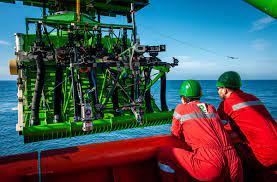 Formed by the merger of DeepGreen Metals and Sustainable Opportunities Acquisition Corp (SOAC), the company looks set for a bumpy ride. Over 90 percent of SOAC investors have already redeemed their shares rather than invest in TMC, and two major PIPE investors have reneged on their promised investments. To add salt to TMC’s wounds, Government and non-government officials alike overwhelmingly voted in favour of a moratorium on deep sea mining at the IUCN’s World Conservation Congress two weeks ago.

Maureen Penjueli of the Pacific Blue Line Collective stated, “Pacific Island states sponsoring The Metals Company (formerly DeepGreen) must be alert to history repeating itself. DeepGreen and TMC founder, Gerard Barron was central to Nautilus Minerals. That company was liquidated in 2019, leaving Papua New Guinea with a loss of AUD$157 million (US$113.7 million). Baron was smart and walked away with a sizeable personal profit before investors caught on to what a risky proposition Nautilus was. Global miner Anglo American divested and the company failed to obtain finance. It looks like investors have caught on early with TMC.”

Dr Helen Rosenbaum of the Deep Sea Mining Campaign(DCMC) stated, “There are many parallels between TMC and Nautilus Minerals – same founders – same modus operandi. The TMC business plan like Nautilus’ is riddled with risks relating to litigation, potential liabilities, lack of insurability, market uncertainty for the metals it plans to mine and huge questions over technical and financial feasibility. The prospectus submitted to the U.S SEC, clearly shows that fundamental aspects such as future revenues, operating expenditures and the value and size of mineral reserves are based on speculation.”

“And now TMC is planning to sue the PIPE investors having second thoughts – reminiscent of Nautilus Minerals forcing PNG via arbitration in Australia to invest in the failed Solwara 1. If TMC mines only the markets as Nautilus did – it will be a good outcome for the Pacific environment overall, but a poor outcome for those states who put faith in the company,” Dr Rosenbaum concluded.

Penjueli concluded, “It is extremely clear that Pacific sponsoring states of Nauru, Kiribati, Tonga and the Cook Islands are out of step with global efforts to increase protection for the deep ocean and to address the climate crisis.”

“We welcome Fiji’s leadership on pushing a moratorium on DSM since 2019, and as the Chair of the Pacific Islands Forum, a climate change champion through the Ocean-Climate Ambition Summit, we call on Fiji to convene an urgent meeting of Pacific Island leaders to discuss the risks of DSM, for our Ocean and for the livelihoods of all Pacific peoples.”

“To TMC, we say, you will face fierce opposition from our growing public mobilisation. You have no social license and we will ensure that your shareholders know the risks that carries,” she said