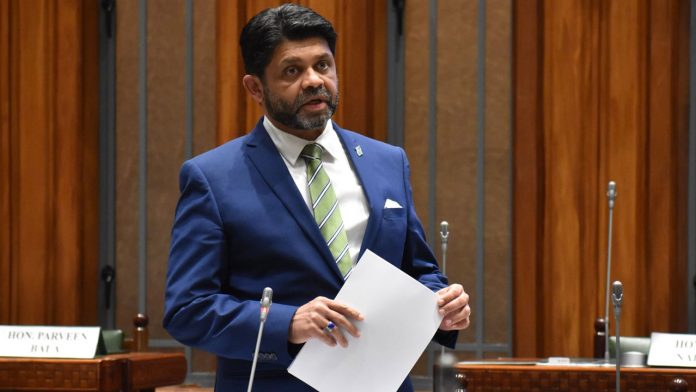 Fiji is among the climate-vulnerable countries in the region that continues to receive less than one percent of global climate finance.

Minister Responsible for Climate Change, Aiyaz Sayed-Khaiyum said this is unfair and unsustainable.

While speaking on ‘priorities for Fiji at COP26’ in parliament today, Sayed-Khaiyum highlighted the unfair disbursement of climate financing is against the Paris Agreement which states the need to aim for a resource mobilisation balance between climate mitigation and adaptation.

He said Fiji will continue to lobby for access to affordable climate finance for developing countries and to raise additional financing for adaptation.

“We seek to provide strong guidance to bilateral and multilateral resources of climate finance to prioritise financing for adaptation projects and will be putting pressure on these funding sources to better support countries that have developed their national adaptation plan.”

Opposition MP, Lenora Qereqeretabua in her response said this is an ongoing issue, and accessing adequate funding will remain a challenge.

The Minister stressed Fiji will have to spend billions on adaptation due to the damage done by climate change.

This has prompted Fiji to develop a robust National Adaptation Plan with over 160 action items that require adequate financial footings.

“To address this future human mobility needs, the Fijian Government has established the Climate Relocation of Communities Trust Fund which has received an initial grant commitment of $2.5 million(US$1.1 million) from the Government of New Zealand. We are now working and facilitating the relocation of few communities in Vanua Levu that have been severely impacted by multiple cyclones, saltwater intrusion, and land degradation.”

Sayed-Khaiyum said there are 40 other rural communities have been identified for relocation.

India hits back after PNG bans flights over COVID ‘deception’