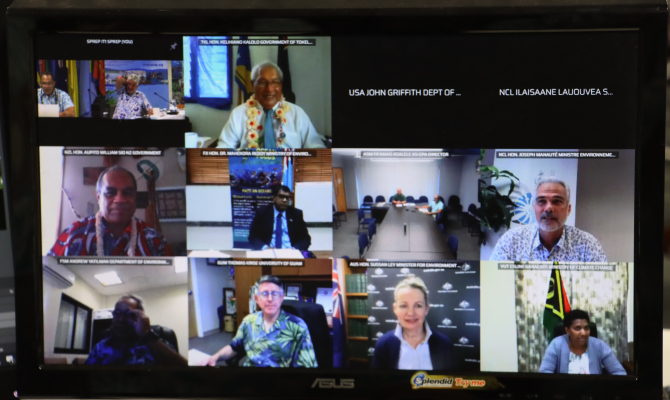 Ministers from around the Pacific Friday gathered virtually to participate in a ‘Talanoa’ to discuss some of the pertinent key priority issues bearing direct impact on responsive and pragmatic actions for a resilient Blue Pacific.

The talanoa was conducted through three focus panels with Ocean being the overarching theme – Ocean and Climate Change, Ocean and Pollution, and Ocean and Deep-Sea Mining.

The Ministers reaffirmed that the Pacific Ocean is the lifeblood of society in the Pacific, providing cultural and historical identity since time immemorial and uniting the Pacific islands in common purpose. They also noted the alarming, unprecedented severity and frequency of threats to the Pacific Ocean from climate change and other anthropogenic stressors.

Ministers reaffirmed their commitment to the 2050 Strategy for the Blue Pacific Continent, recognising that a resilient Blue Pacific is necessary to meet the extraordinary and unabating challenges of modern times.

In his keynote address, the Ulu o Tokelau, Faipule Kelihiano Kalolo, Chair of the Environment Ministers High-Level Talanoa, stated that the prioritisation of ocean and climate change considerations into national and regional policies in alignment with the 2050 Strategy for the Blue Pacific Continent is recognition of the critical need to protect Pacific peoples and their livelihoods, preserve biodiversity, support sustainable development and the key role that the ocean plays in combating climate change.

“The overwhelming scientific evident prioritises ocean as the ultimate regulator of climate through the water cycle and oceanic circulation,” Kalolo said.

“This is underscored in the Pacific Leaders’ advocacy work of the ‘Blue Pacific Narrative’ and the ‘Blue Continent’, recognising the reliance of Pacific nations and cultures on the sustained resilience of ecosystem services provided by the Pacific Ocean and reaffirming the Pacific’s global leadership on oceans.”

Ministers reaffirmed that climate change is the single greatest threat facing the Blue Pacific, and encouraged all Parties to the United Nations Framework Convention on Climate Change (UNFCCC) to ensure that the 26th Conference of the Parties which will be held in October this year recognises and advances the work on Oceans in the UNFCCC, recognising its centrality to the Blue Pacific Continent.

Marine pollution, including plastics, nuclear waste, radioactive, vessel spills, and others was also high on the agenda at the Ministers’ Talanoa. The Ministers noted that marine pollution produces negative impacts on food security, human health, biodiversity, livelihoods and culture. Entire ecosystems and species are placed at risk as well as the people whose livelihoods and economic development that depend on them.

The Ministers affirmed that as the Blue Pacific, they are implementing the Pacific Marine Litter Action Plan 2018-2025, but recognised that the interconnectivity of the world’s oceans means that marine pollution as a transboundary problem requires the coordinated, collective, and effective involvement of all countries.

The issue of Deep-Sea Mining was discussed at the last Ministerial talanoa in 2019, and the Ulu noted that since then, there has been a significant shift towards seabed mining for economic reasons.

Ministers acknowledged that in accordance with international law as reflected in the United Nations Convention on the Law of the Sea (UNCLOS), countries have the sovereign right to develop the mineral resources of their continental shelf, territorial sea and exclusive economic zone according to national priorities.

However, they also acknowledged that countries have responsibilities under UNCLOS regarding the exploitation of resources, noting the Rio Principles and further acknowledging that countries should protect and preserve the marine environment.

They recognised that while deep-sea minerals offer potentially significant economic benefits, the ecology of the deep-sea environment and deep sea mining’s adverse effects are poorly understood, and recognised the importance of cooperation between Members and Council of Regional Organisations of the Pacific (CROP) agencies and the need to develop expertise within the region to provide scientific expert advice with respect to seabed mining, deep-sea ecology and oceanography.

The Ministers concluded by expressing their gratitude and appreciated to the Secretariat for organising a successful Talanoa and SPREP Meeting of Officials held earlier in the week.

They also congratulated the outgoing Director General of SPREP, Kosi Latu, on his excellent leadership of the organisation for the past six years, and wished him well for life after SPREP.

The Meeting brings together SPREP’s 21 Pacific Island Member countries and 5 Metropolitan Members to discuss strategic issues pertaining to the organisation, and to approve the 2022-2023 work plan. The Environment Ministers’ High-Level Talanoa will be held on Friday 10 September 2021.

The five Metropolitan members of SPREP are: Australia, France, New Zealand, United Kingdom and the United States of America.

The 30th SPREP Meeting of Officials follows on from the Second Executive Board Meeting which was held in 2020.