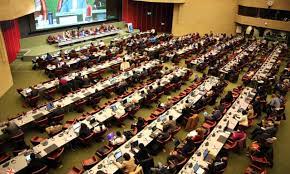 Time is running out for governments to reach an ambitious Paris-style agreement for nature, say campaigners, who warn that crucial negotiations to protect biodiversity are moving at a “snail’s pace”.

Amid increasingly alarming scientific assessments about the state of life on Earth, negotiators are meeting in Geneva for talks aimed at halting and reversing the destruction of wildlife and ecosystems that support human civilisation.

Governments are hoping to make up for lost time in the much-delayed process, which should have seen an agreement in autumn 2020, with three concurrent meetings running until 29 March, the first time they have met in person since talks in Rome in March 2020 as the pandemic closed in.

The draft UN convention on biological diversity (CBD) sets out targets for the end of the decade. These include protecting 30% of land and sea, eliminating billions of dollars of environmentally harmful government subsidies, and restoring at least a fifth of degraded freshwater, marine and terrestrial ecosystems.

The final version will be negotiated in Kunming, China, at the Cop15 summit, which is expected to be held at the end of August, the first time China has held the presidency for a major UN environmental agreement.

But campaigners say negotiations are moving slowly and another meeting before the final summit in China might be necessary.

Guido Broekhoven, head of policy at WWF International, said: “Despite countries arriving in Geneva committed to making progress on a global plan to tackle nature loss, the complexity of the issues discussed have led negotiations to move forward at a snail’s pace over the last week. We are yet to see governments try to close the enormous gap between the unambitious draft global biodiversity framework currently on the table.”

These concerns were echoed by Li Shuo, a policy adviser for Greenpeace China, who has been following the biodiversity negotiations closely. “Many of the issues, we simply don’t have enough time to deal with,” he said. “Several of the most important discussions have not happened yet and I don’t think there will be time in Geneva. I am worried watching the sessions and we can’t keep kicking the can down the road.”

Unlike its sister climate convention, which has one overarching aim, the CBD balances three main goals: conservation, sustainable use of biodiversity and the fair sharing of benefits from genetic resources. Its scope and complexity mean targets can sometimes compete with each other, and sources said another in-person meeting might be needed ahead of the final talks in China later this year.

Curbs on agricultural pollution and sharing the benefits of digital genetic resources are expected to be particularly controversial, but a recent decision by 173 governments to draw up a legally binding treaty on plastics pollution has bolstered negotiations.

Despite concerns about the speed of negotiations, UN diplomats leading the process said there were signs of hope. “I am cautiously optimistic,” said Basile van Havre, co-chair of the CBD working group responsible for drafting the agreement, from the talks in Geneva.

“We need to find the bliss point between ambition and resources. For example, there will be a good discussion here on 30 by 30 [the target to protect 30% of land and sea by 2030] with the provision that it will be approved if there is money on the table. I am interested to see how the discussion on pollution unfolds, particularly on pesticides and nutrients,” he said.

Last month, the UK, U.S, Canada and Argentina blocked proposals to halve nitrogen waste – commonly the result of intensive farming and fossil fuels – at the UN environment assembly in Nairobi, Kenya. The decision raised questions about a draft target to reduce nutrient runoff by at least 50% by 2030.

How this decade’s targets will be enforced and monitored is also under discussion in Geneva. Governments have never met a target to halt the destruction of nature.

“The previous targets didn’t inspire public and political action. I don’t think they were very well known,” said Bernadette Fischler Hooper, head of international advocacy at WWF UK. She said becoming “nature positive” by 2030 must become the north star for biodiversity, akin to the 1.5C and 2C targets in the Paris agreement.

“If we get an inspiring mission from this new framework, it will become a joint rallying cry like the one we have for climate,” she said.