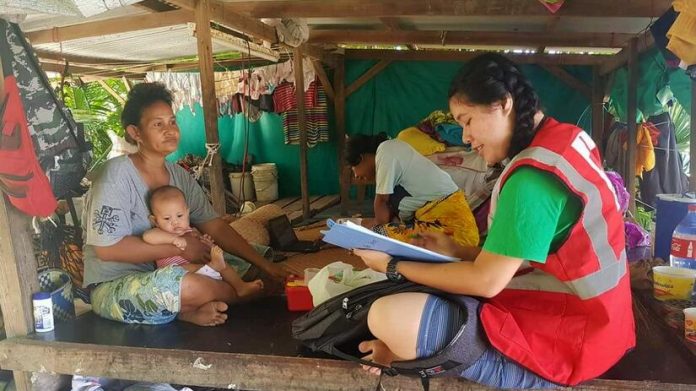 The small Pacific Island nation of Tuvalu, has been experiencing low rainfall conditions, with mounting concerns of extreme water shortages for people across the tropical islands.

Tuvalu has been facing drought conditions for the past three months and rainfall levels have been some of the lowest ever recorded.

There are fears communities may face water shortages in the coming months if rainfall continues to be below normal, especially as the Red Cross Red Crescent Early Action Rainfall Watch places Tuvalu at ‘dry warning’ level, with high risk of severe dry conditions getting worse.

“Record low rainfall levels leave our drinking water tanks empty and our crops withered. Climate extremes are hitting our country hard. Our communities rely on rainfall as the main source of fresh water as there are no rivers on the island.”

“Water harvesting systems are completely dependent on rainfall. No rain, no water to harvest and when it does rain, the amount we are able to collect is dependent on the intensity of the rainfall.”

“Early action is being ramped up to assist people in remote communities across the country, to take proactive steps to analyse these impacts and build their knowledge and capacity to prepare for periods of drought.”

To support Tuvalu Red Cross with their drought early action, the International Federation of Red Cross and Red Crescent Societies (IFRC) has released emergency relief funds of around 30,000 Swiss Francs (US$33,000).

Tuvalu Red Cross will assist people with their household water tank monitoring and deliver drought awareness activities to help communities cope with the current dry period with rainfall levels at some of the lowest recorded and to be better prepared for periods of droughts.

“These seriously dry drought levels and forecasts of worse to come in a Pacific Island tropical country reveal how exposed we are to the ravages of extreme weather events which are being fuelled by a changing climate and warming oceans.”

“This IFRC funding is the first ever Disaster Relief Emergency Funds released at the early onset of a drought in the Pacific.”

“It’s critical to invest more in preparing early to enable Red Cross in the Pacific to support their communities to be safe ahead of disasters so they can reduce impacts and build resilience,” said Greenwood.