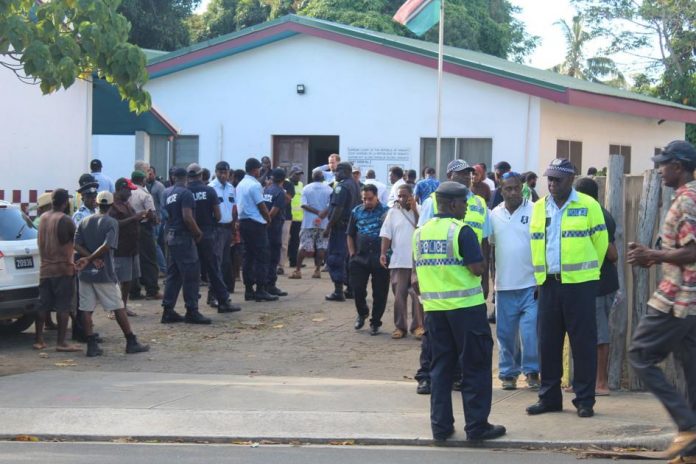 The decision of the former Vanuatu Speaker of Parliament on the announcement of the vacation of seats of 19 Members of Parliament (MPs) has been overturned.

This comes as Justice Viran Molisa Trief ruled Monday that the MPs have not been absent on three consecutive sittings, thus Prime Minister Bob Loughman, Deputy Prime Minister, Ishmael Kalsakau and other 16 other Members of Parliament (MP) will continue to remain as MPs in the 12th Legislature.

Justice Trief focused on three main issues; whether the absence from a sitting of Parliament is an absence from the Chamber or from the wider precincts of Parliament; were the MPs ‘absent’ from the 1-3 June 2021 sittings within the meaning of section 2(d) of the Act and finally, whether the MPs have the tacit permission of the Speaker to be absent on 02 -03 June, 2021.

The Supreme Court Judge explained that the sitting can only continue if there is a quorum. Quorum is established by the Members of Parliament present at the sitting.

In her discussions, she stated, “First, I have regard to the plain meaning of the ordinary word ‘absent’.

“I accept Kalsakau’s submission that reference to the plain meaning of the ordinary word ‘absent’ produces an ambiguous result when applied to the facts in this case because it is not apparent whether the intention of Parliament was ‘absent’ to be interpreted as ‘totally absent’ or ‘partially absent.’

“Given that ambiguous result, I accept Kalsakau’s further submission that section 8 (3)(b) of the Interpretation Act is activated and I must give section 2 (d) such fair and liberal construction and interpretation as will best ensure the attainment of the object of the Act, according to its true intent, meaning and spirit.

“The long title of the Act includes, relevantly, ‘To make provisions for… the vacation of seats by members of Parliament in certain circumstances.’

“That stated purpose of the Act is to make provision for the vacation of seats by Members of Parliament in certain circumstances.

“I accept the submission that parliamentary procedure is a matter reserved to Parliament under the Constitution. “It would be therefore be inappropriate and contrary to the principle of separation of powers for the Courts to undertake inquiries into the length and/or reason for a Member’s temporary absence from a sitting of Parliament.

“I consider that this too is a result which cannot reasonably be supposed to correspond with the intention of Parliament.

“Accordingly, I consider that the fair and liberal construction and interpretation of the word ‘absent’ in section 2 (d) as will be best ensure the attainment of the object of the Act according its true intent, meaning and spirit is that it requires an absence from the entirely of a sitting.”

“Applied to the facts of this case, the MPs were not absent from three consecutive sittings and therefore their seats have been vacated.

“If I am wrong and the word, ‘absent’ in section 2 (d) should be interpreted to mean a partial absence, I consider that in attending the morning period of the 3 June 2021 sitting at which a Government bill was debated and passed, the MPs enabled Parliament to be effective in accordance with the object of the Act, notwithstanding their subsequent absent from that sitting,” she said.

“Accordingly, they were not absent from three consecutive sittings within that meaning of section 2(d) and their seats have not been vacated.”

The Supreme Court Judge clearly highlighted that this case is a reminder that Parliament can only function if members attend.

Members of the Parliament are accordingly expected to attend sittings of Parliament of face application of section 2(d) of the Act.

Meanwhile, Nigel Morrison who acts for third respondent, MP Gracia Shedrack confirmed they are seeking instructions for appeal on this ruling.