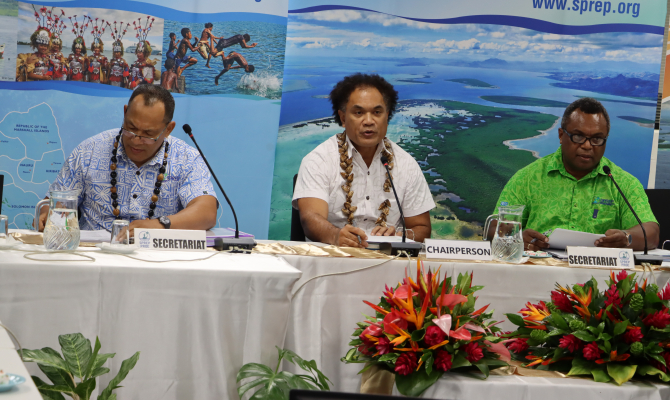 The 16th meeting of the Conference of the Parties to the Convention for the Protection of Natural Resources and Environment in the South Pacific Region, also known as the Noumea Convention, officially convened today, with Parties and Observers joining virtually due to the ongoing COVID-19 pandemics and subsequent border closures across the Pacific.

The Noumea Convention, which entered into force in 1990, is a comprehensive umbrella agreement for the protection, management and development of the marine and coastal environment of the Pacific region. It is the legal framework to ensure that environmental management and sustainable development of natural resources are implemented throughout the Pacific. The Secretariat of the Pacific Regional Environment Programme (SPREP) is the Secretariat for the Convention.

SPREP Director General, Kosi Latu, in his opening remarks stated that while we are currently living in unprecedented times, the Secretariat, since the last COP in 2019 has managed to carry out some of the key activities to support Parties’ capacity to implement their obligations under the Noumea Convention.

These activities included the full commencement of the programme on capacity building related to the Multilateral Environmental Agreements (MEAs) in the African, Caribbean and Pacific (ACP) Countries with the recruitment of personnel to coordinate the implementation of activities under the programme, as well as the establishment of an oil spill response agreement with the Oil Spill Response Limited for all Pacific island countries and territories, which will allow for better protection of the marine environment from impacts of oil spills.

He added that the ‘Strengthening Environmental Impact Assessment: Guidelines for Pacific Countries and Territories’ guidelines continue to be highly valued and formally recognised and referenced by the World Band and Asia Development Bank as good practices, and work to complete National Environment Management Strategies continues with Parties such as Papua New Guinea and Solomon Islands.

“Those are just a few of the plethora of activities that your Secretariat has undertaken to assist our Parties in the implementation of obligations under the Noumea Convention,” he concluded by saying.

The virtual COP began with the election of Samoa as the new Chair of the Convention, with Nauru as Vice Chair. Assistant Chief Executive Officer of the Ministry of Natural Resources and Environment of Samoa, Seumalo Afele Fa’iilagi, assumed Chairmanship of the meeting, expressing his gratitude and appreciation to his predecessor, Pawa Limu of Papua New Guinea, for his leadership over the last two years.

Jope Davetanivalu, Acting Director of SPREP’s Environmental Monitoring and Governance programme, presented the full report from the Secretariat on work and activities conducted under the Convention over the last two years, to assist Parties with the implementation of their obligations under the Convention. These activities were carried out under the areas of Marine Pollution, Marine and Coastal Conservation Work, and Environmental Impact Assessments.

The 16th Noumea Convention COP is being held prior to the 30th SPREP Meeting of Officials, which will convene from 7 – 10 September 2021.