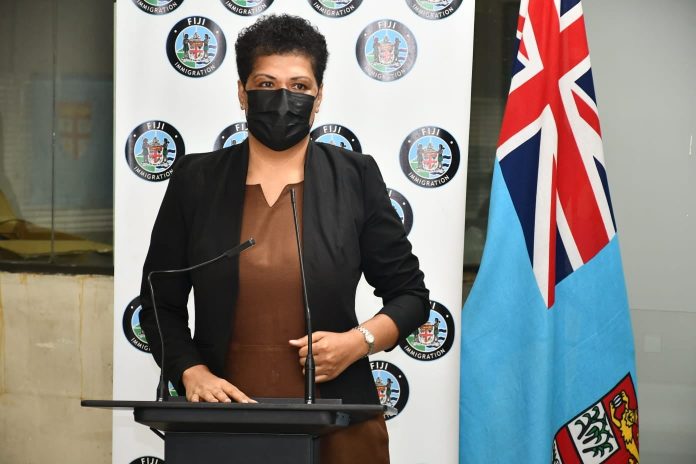 The Fijian Immigration department has announced the appointment of its new director, Amelia Kotobalavu Komaisavai with effect from 13 September 2021.

Komaisavai’s appointment was confirmed after a series of selection processes under the Open Merit Recruitment and Selection (OMRS) guideline.

Prior to this appointment as the new director, Komaisavai served as the Chief Policy and Research Officer at the Office of the Prime Minister before her appointment as the Acting Director for the Fijian Immigration department in August 2020.

Karan further stated that the appointment of the new director is imperative given the recent upgrade of ICT infrastructure and implementation of emerging technologies which includes support towards online processing and assessment of all Immigration services.

“Komaisavai is no stranger to the position, as the former Acting director of the department, she has performed exceptionally well in the recruitment selection process ahead of the many potential candidates that vied for this position. I am confident that she will continue to lead the Department in its transition to e-platform and digitisation amidst the current COVID-19 pandemic,” he said.

Karan said that he is confident that the newly appointed director will ensure that the Fijian Immigration Department fully supports the Fijian Government’s commitment to ‘An inclusive, safe, secure, stable and prosperous Fiji’ through the comprehensive development of the Border Security and Immigration Service. In addition, Karan also stated that Komaisavai possesses a wealth of experience and skills which will, no doubt, further enhance the overall operations of the Department.

Komaisavai holds a certificate in Professional Diploma in Business, a Bachelor of Arts and a Master’s in Business Administration from the University of the South Pacific.

The Prime Minister and Minister for Immigration, Voreqe Bainimarama also welcomed Komaisavai’s appointment and congratulated her for being appointed as the first female Director of the Department.