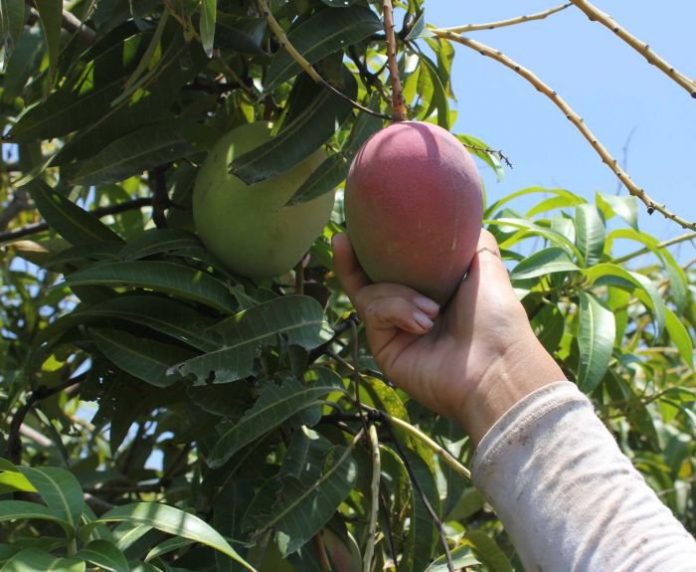 More than 160 seasonal workers from Vanuatu have landed in Darwin to bolster the Northern Territory’s mango-picking workforce for this year’s harvest.

The workers arrived on a chartered flight from Port Vila on Tuesday and will spend the next 14 days at Howard Springs quarantine facility, before heading to work across Top End orchards.

The group will join dozens of ni-Vanuatu harvest workers who arrived in September last year and had their visas extended to continue picking fruit.

Without them, Darwin Fruit Farmers manager Mark Smith said, many growers would not be able to send their mangoes to market.

“You know, eventually, if you drop the fruit too many times on the ground, it doesn’t last too long.”

The charter flight carrying the mango pickers from Vanuatu, plus the cost of funding each worker’s supervised quarantine period, is estimated to be costing the industry more than $650,000(US$475,000).

A second flight carrying 220 workers from Samoa is due to arrive in Darwin on 19 September.

The NT government said it has been working with the Australian, Vanuatu and Samoan governments to arrange the workers’ charter flights and quarantine.

“The Territory’s mangoes are the absolute best, but it’s important we’ve got the workers,” Agriculture Minister Nicole Manison said.

But Katherine-based mango farmer Nino Niceforo said the NT government had failed to support all growers.

Speaking to ABC Country Hour, Niceforo said he arranged for 75 seasonal workers to come to Australia, but they were forced to quarantine in Western Australia because the NT government did not allow them to use the facilities in Darwin.

“We aren’t getting any support at all from the Territory government.”

The NT’s mango industry generates more than $130 million (US$95 million) per year, and accounts for more than half of Australia’s mango production, according to the NT Farmers Association.

However, the extra boots on the ground have not been enough to offset the COVID-induced labour shortfall in an industry that relies on foreign workers.

That’s why he urged Australians to put up their hands and contact Harvest Trail Services, an Australian government-run service that connects job seekers with growers and farmers in the Top End.

“I just want to reiterate: There are jobs here if any Australians want a job,” Burke said.

“We have plenty of work.”

However, securing a job picking fruit during the pandemic is not as simple as picking up the phone.

About 220 Australians have registered their interest in coming to the NT to pick fruit, but remain stuck in the locked-down states of New South Wales and Victoria, Burke said.

Meanwhile, more than 6,500 seasonal workers have arrived in Australia under the Seasonal Worker Programme (SWP) between August last year and July 31, according to data from the federal Department of Education, Skills and Employment.

That figure includes at least 342 arrivals in the NT.

“We have zero tolerance for exploitation,” he said.

“They get paid per hour, like any other person in any other industry.”

The seasonal workers may have arrived, but it seems the weather has not been kind to a lot of mango growers.

The industry has released its first crop forecast for the season, with predictions the Darwin region will produce around 2.8 million trays – which is similar to last year.

“I’ve always been a firm believer that after a good wet season, we’d have a good mango season in volume-terms, but [the weather] has proved us all wrong,” said Leo Skliros, president of the NT Mango Industry Association.

“I’ve been speaking to growers and the pattern that has emerged is the same.

“The fruit that is there is looking very good though and they’re sweet and juicy, I just hope we can get this crop off and get it down to the public.”

Around 70,000 trays of mangoes have been picked in the NT over the last fortnight, with the NT’s mango season due to peak around the middle of October.