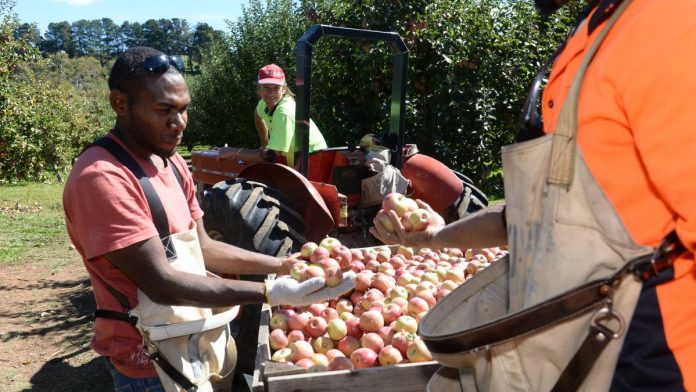 Vanuatu could be the first country in the region to trial pre-quarantining of seasonal workers in country, as Australia looks to meet its commitment to double the number of Pacific labourers by March.

Australia’s Agriculture Minister David Littleproud told ABC’s AM programme, earlier this week, that the arrangement would include Vanuatu.

“This month we’ll be trialling in country quarantine in Vanuatu.”

“[South Australia’a] chief health officer has got comfortable with the risk profile of Vanuatu that they’ll allow them to quarantine in country,” he said.

Vanuatu’s Director of Foreign Affairs Yvone Basil said they’d hoped for it to start this month following talks with the Australian High Commission but so far no date has been set on when it would be rolled out.

“We have agreed to the process…we are just looking at the technical part on how to implement this new process for pre-quarantine,” he said.

Dan Dempsey a Vanuatu seasonal worker agent has welcomed the move saying it would free up quarantine space in Australia and would be a cheaper option for farmers compared to what they’re paying now.

He said it would also be a more humane approach for Vanuatu workers who have complained of not being able to contact family back home when they enter into quarantine in Australia.

“We’ve had feedback to say that there has been some sort of mental issues with having someone quarantine alone in a room for people that are really quite gregarious,” he said.

Dempsey is sending more than a 100 workers to mango farms in the Northern Territory this week who will be quarantining at the Howard Springs facility but he said an in-country option is a better choice.

He said the concept was first put forward several months ago but there’s been concerns about Vanuatu’s ability to provide a robust quarantine service.

Basil from the Department of Foreign Affairs said health authorities in Vanuatu would be responsible for getting Vanuatu prepared to handle in country quarantine.