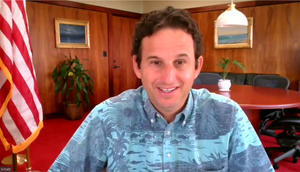 In an online news conference with Pacific Islands journalists Wednesday, U.S Senator Brian Schatz (D-Hawai’i) said the United States needs to “step up” engagement in the region in order to help tackle the “catastrophic” effects of climate change, COVID and a variety of other issues.

“The U.S is a Pacific nation, and our leaders need to be more involved in the region,” Schatz said. “I continue to articulate to my colleagues that there are lots of nations and cultures and economies and challenges in this vast Pacific Ocean, and everybody counts.”

Senator Schatz has taken an active role in matters related to the Pacific Islands, most recently as a new member of the Foreign Relations Committee. Earlier this year he was able to include several provisions in major bipartisan foreign policy legislation that are aimed at enhancing Oceania in US policymaking, including:

*Establishing a strategic roadmap for strengthening U.S engagement with the countries of Oceania and elevating the region in U.S national security and economic considerations.

*Working with allies and partners like Australia, New Zealand, and Japan on such regional issues as maritime security, illegal fishing, environmental protection, and disaster preparedness.

*Ensuring that U.S international aid agencies better include the developing countries of Oceania in strategic planning and programme evaluation processes.

*Developing strategies to once again expand the Peace Corps presence in the Pacific.

*Assessing the impact that illegal, unregulated and unreported fishing has on the economies of Oceania and the use of advanced technologies to combat it.

The legislation, dubbed the United States Innovation and Competition Act, passed the Senate in June with bipartisan support and is now awaiting action in the House of Representatives. In addition, an even more comprehensive measure Schatz co-introduced, the Honouring OCEANIA Act, was unanimously adopted by the Foreign Relations Committee, he said. “I do not think this is something that would have happened, say, 10 years ago,” Schatz told the journalists. “There is a deeper and more enthusiastic understanding of the role of Oceania.”

Asked about criticism that American policymakers are only paying renewed attention to the Pacific Islands now because of China’s stepped-up involvement in the region, Schatz conceded it was a legitimate perception but said, “You know, I think it’s a good reason. … We have not tended to soft power, which is a sort of bureaucratic way to say we haven’t been good enough to our friends. So one of the things that I think is critical going forward is to really renew these friendships in ways that are meaningful. … I don’t think that it’s the right way to look at these friendships as an instrument to just sort of secure a base or a friendly government. These friendships have to be real, not just depending on our situational needs.”

Long a leading advocate of climate change action, Schatz said he thinks “we need to continue to give not just a voice but special stature to island nations, because they are on the front lines of the climate crisis. … These changes are impacting island cultures, communities, and economies, and we as a global community need to actually address this and rapidly reduce emissions. Because if we don’t the results will continue to be catastrophic—more droughts, more floods, more hurricanes, and, in some cases, islands literally wiped off the map.”

Schatz, who chairs the Senate’s Indian Affairs Committee, added that “as we think about climate solutions, it’s not just thinking about doling out money to communities that are harmed. It’s also talking especially to native people everywhere to actually have them tell us what they need and we ought to be doing. … So I don’t think this should be a one-sided conversation about resources flowing; it should also be about expertise flowing from these island nations to decision makers in Washington. I think that’s a paradigm shift that is going to take a while to accomplish, but it’s something that’s important to me.”

Asked what the .US can do to further help Pacific Island nations struggling with COVID-19, Schatz said: “I think it’s straightforward: It’s got to be providing more and more vaccines. … I think the federal government needs to continue to put more money into COVAX [the effort by the World Health Organisation and others to deliver vaccines fairly to all countries] so that the global vaccine supply starts to be equal to the task.”

In terms of assistance with economic recovery from the pandemic, he said: “Climate adaptation, action and mitigation is an economic development strategy. All of your nations are going to need investment in hard coastal infrastructure, in fisheries management, ports, aviation, and agriculture. … So I think you’re going to need money for all of those things.”

Regarding pending negotiations with the three Micronesian countries that have compact of free association agreements with the U.S—the Marshall Islands, Federated States of Micronesia and Palau—Schatz said he and others have been pressing to give the talks higher priority.

“We’ve been pushing as hard as we possibly can to get this thing going, because this really defines our relationship, at least as it relates to specific federal law,” he said. “But I think we have some ways to go in terms of educating colleagues, because [Congress] is sort of a Eurocentric and Middle East-centric institution. … All these issues we’ve talked about flow from an awareness of the importance of the Pacific Islands, so we have to start there.”

Presented by Honolulu’s East-West Centre (EWC), the press conference was held as part of a partnership between the Centre and the Institute for War and Peace Reporting (IWPR), with funding from the U.S State Department, that aims to help build news media capacity in the Pacific. Earlier this month, participants in the programme also attended a similar virtual news conference with. U.S Rep. Ed Case.