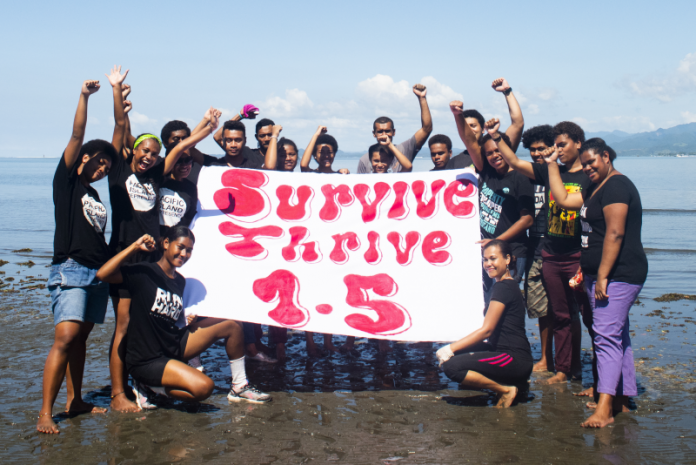 By Solomon Yeo and Vishal Prasad

The recent Intergovernmental Panel on Climate Change (IPCC) report has reaffirmed that no one is safe from the climate crisis. Globally, we all now face the impacts of a warming planet.

Here in the Pacific, we are faced with some of the most extreme effects of the crisis with predictions showing the worst is yet to come.

Impacts will be catastrophic unless we catalyse global action towards reducing emissions to zero as soon as possible.

Whilst some parts of the world are responding slowly to the alarming science, the Pacific has always been active in recognising the threats of the crisis and advocating for stronger and more ambitious action.

The youth led campaign to seek an advisory opinion from the International Court of Justice is one such proposal. It seeks to motivate, guide and accelerate global climate action in a bid to protect endangered human rights and avert the most severe impacts of climate change.

What is an Advisory Opinion?

The International Court of Justice is the world’s highest court. Its primary roles are to settle legal disputes submitted to it by States and to give advisory opinions on legal questions referred to it by authorized United Nations organs and specialized agencies.

The advisory opinion jurisdiction of the ICJ has been instrumental in maintaining global peace by clarifying and developing international law. Advisory opinions are by nature not adversarial. They are general legal clarifications and advice that the court provides on specific legal questions.

Advisory opinions have been pivotal in the establishment and development of international laws from the right to self-determination for colonised people, the prevention of genocide, and nuclear disarmament. We believe it could do the same for climate change.

The profound nature of the climate crisis warrants an authoritative and powerful response.

Why an advisory opinion on climate change and human rights?

In March 2019, law students from all across the Pacific crammed into a classroom of The University of South Pacific in Vanuatu for a presentation on climate change and human rights.

Understanding how climate change results in human rights violations motivated activism that led to our Pacific youth campaign to seek an advisory opinion on climate change and human rights that would clarify the obligations of states to protect the rights of current and future generations from the adverse effects of climate change.

The UN Human Rights Committee in 2018 had noted that “climate change constitutes one of the most pressing and serious threats to the ability of present and future generations to enjoy the right to life.”

Along with the right to life, our Pacific communities are experiencing intensifying threats to their right to water and sanitation, food, health, and many other of the most basic rights.

These threats are not exclusive to the Pacific. As highlighted by the latest IPCC climate science report, communities around the world are either facing or will be facing similar threats to their human rights in the near future.

Rightly so, the UN High Commissioner on Human Rights warned that “The economies of all nations, the institutional, political, social and cultural fabric of every state, and the rights of all people, and future generations, will be impacted by climate change.”

How can an ICJAO benefit the Pacific?

In the midst of such serious threats to human rights, it is important to note that states bear the ultimate responsibility to protect and provide for these rights. However, the glacial pace at which global climate action is progressing shows that states are failing to meet these duties and obligations to protect the rights of current and future generations.

This is partly because many of these duties and obligations have remained vague and unclarified under international law. An advisory opinion can help bring clarity to many of these state obligations on dealing with climate change by integrating human rights considerations.

For instance, many Pacific states and communities are forced to face the dilemma of having to consider relocation.

This is as a result of sea level rise and exacerbated climate impacts in their countries. Internal migration of low lying and coastal communities are currently ongoing across many Pacific countries with limited support and resource capabilities to properly facilitate this.

Frameworks for external migration, although a last resort for many Pacific countries, also remain underdeveloped with several gaps in international law and politics that make climate migration possibilities more difficult.

These gaps raise difficult questions such as where climate-vulnerable individuals and communities would relocate to? How will the costs of climate migration be borne and by whom? What would be the status of these countries that have lost territory under international law? These are difficult questions to grapple with.

Other than bilateral arrangements, there are no existing international treaties that address climate migration issues.

Additionally, state negotiations under the United Nations Framework Convention on Climate Change (UNFCCC) remain the leading avenue for dealing with the climate crisis. These will be further strengthened and complemented by an advisory opinion.

The voluntary nature of the Paris Agreement requires continued encouragement for ambitious climate action to meet the 1.5°C target.

An Advisory Opinion can help catalyse, through an effective diplomatic campaign leading up to the opinion, with the opinion itself clarifying state obligations under the agreement.

In doing so, the advisory opinion would help set more concrete and authoritative baselines for states to reduce their emissions and meet their human rights and climate action obligations. In sum, an ICJAO is not an attempt to undermine but rather complement and bolster global climate negotiations.

More specifically, but not limited to, an advisory opinion can:

– Reaffirm under the Paris Agreement the existing state obligations on mitigation, adaptation, finance, technology transfer and capacity building as well as other assistance from developed countries to developing countries;

– Enhance the effectiveness of the international legal system in tackling climate change. For example, by bolstering the authority of human rights bodies’ mandates to address climate change. It could also allow for the creation of new and stronger mandates, for instance, through a UN Special Rapporteur on climate change and human rights.

So how do we get an advisory opinion?

In 2019, Pacific Island Forum leaders, in their Leaders Communiqué, noted the proposal by Vanuatu to seek an ICJAO through the UN General Assembly (UNGA). Since then, the campaign has received growing support.

At the UNGA, a majority vote (at least 97 states) in support of the resolution to seek an ICJAO on climate change and human rights would be needed to refer the matter for the court’s consideration.

The most immediate step to achieving this requires Pacific leaders to endorse the proposal for an ICJAO in order to initiate the momentum of building a coalition of like-minded states that would help secure a majority at the UNGA.

In conclusion, Pacific leadership has been integral in the global climate fight. Now more than ever we need concrete and achievable actions that continue this leadership in averting the existential threat to our region and world.

This would mean taking full advantage of all available legal mechanisms including international courts, to secure the future for the present and future generations. It is time Pacific leaders endorse the ICJAO and initiate the process to take climate change and human rights to the world’s highest court.

The Pacific Islands Students Fighting Climate Change is a youth-led NGO that is campaigning to seek an Advisory Opinion from the ICJ on climate change and human rights.