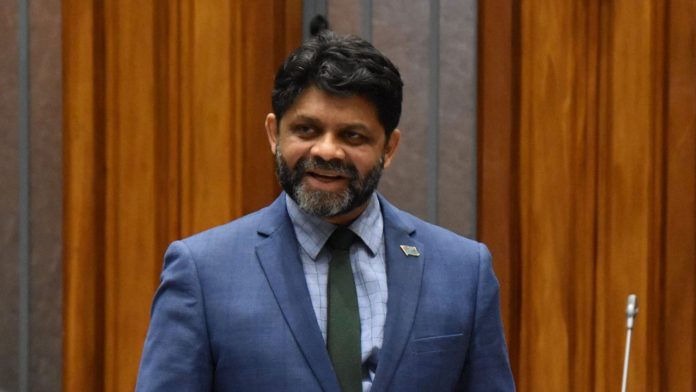 Fiji does not accept Professor Pal Ahluwalia as the vice-chancellor of the University of the South Pacific (USP), says Attorney-General Aiyaz Sayed-Khaiyum.

And he says that Fiji will not provide any funding or assistance to the university for as long as Prof Ahluwalia remains the VC and the university council “fail in its duty to independently investigate him”.

Prof Pal was re-selected to the position of VC by the USP Council after it agreed to offer him a new three-year contract following the meeting of regional members in June; and based out of the USP Samoa Campus.

Speaking in Parliament Thursday, Sayed-Khaiyum alluded to the Nauruan president’s proposal at the council meeting in July this year that regional members, as a council, work with the VC and his senior management team to come up with strategies that would allow the university to operate without Fiji’s grant.

He said the committee would need to look at fees, grants, donors and the “disproportionate Fiji influence on council that is clearly not sustainable if they do not pay their grant”.

“Such proposals show sheer disrespect and disregard to a sovereign nation,” the A-G told Parliament.

“In addition to this, Government has given USP over $130 million (US$61 million) by way of TELS (Tertiary Education and Loan Scheme) and NTS (National Toppers Scheme) apart from the private students.

“No other member country contributes anywhere near this. No other nation has the incentive that Fiji has to ensure that the grant funding to USP is disbursed in accordance with the principles of good governance.”

Sayed-Khaiyum said given the gravity of the allegations of serious mismanagement against Prof Pal, Fiji as the largest contributor to USP would not make any contribution of grant funding to USP until such time when a new VC was appointed in accordance with the mandated transparent recruitment process.

“Fiji has been clear from the start that it will maintain its stance on good governance. Fiji has asked the Council to do the right thing and have all the allegations against the former VC brought to Council by the Chair of Council and the Chair of the Audit and Risk Committee be independently investigated.

“Despite at least six instances of breaches cited in the recent KPMG investigation report, Ahluwalia was given a new contract, in what can only be viewed as a cover-up job; a devious attempt to cover up the breaches by the former VC by those who have also been complicit in his mismanagement.”

“The reappointment of Professor Pal Ahluwalia as USP Vice-Chancellor is welcomed and we thank the Council for their leadership ensuring stability and continuity.

“Fiji doesn’t own USP, it belongs to the region, the Pacific region,” Ro Teimumu said on twitter.

“The other issue he goes on about the current allegations regarding Prof Pal Ahluwalia, we need to go back to before that, that’s just one side of the coin,” Ro Filipe said.

“The original issues were raised by Prof Ahluwalia during Prof Rajesh Chandra’s time and that includes lack of consultation of contractors, contracts renewed within five years, quick succession in titles without proper consultation, professional development leave, back pay, all these were listed there and they were not investigated properly.”

Ro Filipe said some persons implicated under the BDO report had been appointed by Government and were working in the civil service. He questioned the conduct of Prof Chandra and the chair of USP’s Audit Risk Committee and their interference in the investigations.

“There’s a lot of things there which was not provided by the minister (AG), he is just providing one side of the story.”

Ro Filipe said with Fiji withholding its grant, the real victims in the saga were Fijian students and local staff.

He said the A-G’s comparison of Fiji and Pacific Island Country contributions to USP was “defamatory”, “belittling” and brought division into the region.

“Fiji should pay more because it has more students, it is the formula, and to compare this with smaller island states is an insult given that Prime Minister Voreqe Bainimarama is the chair of the Pacific Islands Forum right now.

“You should be bringing together the region not dividing it, belittling island states because they paying less and you have more authority because you’re paying more is just illogical, irrational,” he said.