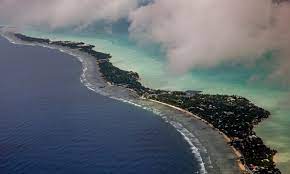 Global heating above 1.5C will be “catastrophic” for Pacific island nations and could lead to the loss of entire countries due to sea level rise within the century, experts have warned.

The Pacific has long been seen as the “canary in the coalmine” for the climate crisis, as the region has suffered from king tides, catastrophic cyclones, increasing salinity in water tables making growing crops impossible, sustained droughts, and the loss of low-lying islands to sea level rise. These crises are expected to increase in frequency and severity as the world heats.

The warnings come as the Intergovernmental Panel on Climate Change (IPCC) published its landmark report on global heating on Monday, which showed that greenhouse gas emissions needed to be halved to limit heating to 1.5C above pre-industrial levels – a target that was included in the Paris Agreement only after sustained lobbying by Pacific island leaders.

“The [IPCC] report is very alarming,” Satyendra Prasad, Fiji’s Ambassador and permanent representative to United Nations, said. “It comes out exceeding where we all thought the estimates were … it brings forward some of the catastrophic scenarios that we have been thinking about in the Pacific of sea level rise, loss of low-lying lands, and possible loss of entire countries within the century. The timelines for these things will certainly be brought much closer.”

The IPCC report presented five scenarios based on varying levels of CO2 and other greenhouse gas emissions. Under the high and very high emissions scenarios outlined in the report, global heating is predicted to reach 3.6C and 4.4C above pre-industrial levels respectively, by the end of the century. Even in the intermediate scenario global warming of 2C would be extremely likely to be exceeded.

The report found that every additional 0.5C of global warming causes clearly discernible increases in the intensity and frequency of heatwaves, heavy rainfall, droughts and extreme weather events.

Ambassador Prasad said the impact of global heating had been felt across the Pacific for years.

“Catastrophic floods and storms have been occurring with considerable frequency: once in 50- to 100-year events have been happening every 10 years. Immediately one can conjecture that catastrophic cyclones, super cyclones, prolonged drought, will become much more frequent and much more intense across the Pacific small islands,” he said.

A new report by Greenpeace Australia Pacific has highlighted the stark climate injustice faced by the Pacific region, which is one of the lowest carbon-emitting regions in the world, responsible for just 0.23% of global emissions, yet has suffered some of the earliest and most severe impacts of rising global temperatures.

“If we look at what those impacts are, probably more than anywhere else, the Pacific is most hit,” said Dr Nikola Casule, head of research and investigations at Greenpeace Australia Pacific.

Joseph Sikulu, Pacific managing director of climate activist group 350.org, said that the IPCC report was “very sobering and alarming, but it’s not unexpected. You could tell already from the lack of leadership and ambition there has been globally on climate change, this was the direction we were heading in.”

Sikulu said the alarming reality warned of in the IPCC report, and the devastating real-world examples of the climate crisis playing out around the world – wildfires in the US, heatwaves in Canada, fires in Siberia, Turkey, and Greece, floods in China – are things that the Pacific has been warning about for years.

“That’s what we have been talking about for decades, because the climate crisis was at our doorstep long before it reached everybody else,” he said.

“The Pacific has always been viewed as the canary in the coalmine, signalling this crisis. Our reality has been used to highlight the climate crisis for decades … The conversation is shifting, everybody is now understanding the reality of the climate crisis, that’s why it’s import to centre frontline communities more than ever,” said Sikulu.