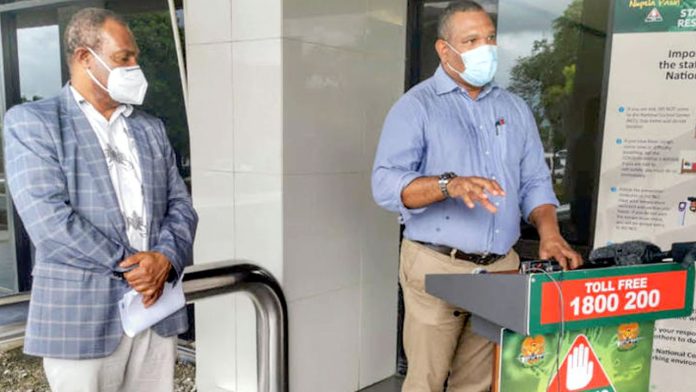 Eight additional COVID-19 positive infections in Papua New Guinea have been identified as being the highly infectious Delta strain.

Police Commissioner and Controller of the PNG COVID-19 National Pandemic Response David Manning made the announcement of the new detections after the first Delta positive case three weeks ago.

The Controller highlighted the risk of the onset of a potential third wave of COVID-19 infections, and called on people to adhere to COVID-safe measures and to get vaccinated.

“We have seen how devastating the delta strain can be in developing countries, with nearly half a million people dead in India and the actual number of deaths most likely being much higher.

“In Fiji over the past month there have been 33,000 new infections and 281deaths, and that is from a population that is one-tenth the size of Papua New Guinea.

“We must all take the threat of a third wave of infections very seriously, particularly with this new highly infectious mutation of COVID-19.

“If the Delta strain were to take hold and spread in Papua New Guinea we face the prospect of thousands of deaths and hundreds of thousands of people becoming very sick.

“In order to stop our people from becoming seriously ill, which will overwhelm our health system and lead to many deaths, we must practice social distancing, wear facemasks and most importantly, get vaccinated,” Manning said.

The Controller said of the eight new cases, one person is from Papua New Guinea and the remaining seven are from other countries.

Manning said, “One of the eight is a female Nursing Officer in Madang, who is the first Papua New Guinean to be confirmed as having contracted the Delta strain.

“She had presented with symptoms on 30 June, and immediately went into isolation while awaiting test results, then remained in quarantine until she was no longer symptomatic.

“When her positive test result revealed a high viral load, a sample was sent to the Doherty Institute in Melbourne for Whole Genomic Sequencing.

“The source of this infection remains under investigation with further results to be released as these are received by the National Control Centre.

“A second case is a female national from Myanmar who was in hotel quarantine after arriving from overseas. She had been asymptomatic but was tested on July 13 because she had been in close contact with another traveler from Myanmar who had tested positive. Both cases from Myanmar have now recovered and are no longer at risk of spreading COVID-19.

“Six of the eight Delta positive infections are male Philippine nationals who had been on the Indonesian ship MV Tajima. All of these men are contacts of the ship’s captain, the Delta Index case who had tested positive at the Pacific International Hospital.

“Four of the six cases had been in isolation on the vessel, while the two others had moved to the Port Moresby General Hospital for isolation on July 13 and had been discharged from isolation. The vessel has been cleared by the National Control Center to depart the country.

“PNG has done well under the International Health Regulations by detecting the COVID-19 delta variant cases, managing them and discharging them when they were cleared medically from isolation and rendering them non-infectious.”

The Controller said the genomic sequencing results for each of these eight new confirmed positive delta strains were received by the COVID-19 National Control Centre from Doherty Institute on 04 August.