While Fiji’s gold medallist Olympian sevens team get on the long nine hours’ flight back home, hours after their historic win in Tokyo against rival New Zealand, the international media at Tokyo 2020 are still abuzz with the spectacular finish, the emotion and humility of the players after the final whistle at Tokyo Stadium Wednesday night.

Major international news outlets speak of the ‘gentle giants on the field bowed in prayers dedicating their win to lifting the spirit of their people who are suffering from COVID19 pandemic.’
Journalists scrambled to find personal angles to stories of players and the challenged they were up against coming to Tokyo.

“We’ve been away five months,” said Asaeli Tuivuaka. “My father just passed away last year, he was the man who encouraged me to play rugby, and this gold medal is for him, and for my baby boy. He is one-year-old now, and I haven’t seen him for five months. I didn’t even get to kiss him goodbye when I left, it is tough for me…” Tuivuaka stopped speaking, and started crying. 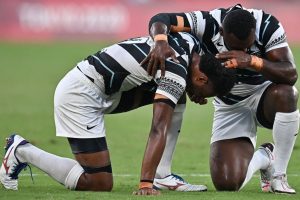 This is the kind of personal sacrifices each player and team management have had to endure in their preparations for Tokyo.

Gold medal winning coach Gareth Baber in his reflections immediately after the game saluted his sevens gladiators and the team management for putting the interest of the nation ahead of their own, to win gold.

“The players and the management staff have been linked together as a community and their families back home made massive sacrifices and we thank them from the bottom of our hearts.

“The boys have honoured that and you can see it in the emotions at the end of the game. They are looking forward to going back to their loved ones. They’ve made huge sacrifices. After quarantine, they will go back to their families, said Baber, who will not be accompanying the team back to Fiji.

He is going back to the U.K to see his family who he hasn’t seen in seven months.

“It’s time I went back as a father and husband to my family. I always feel a little bit guilty when I go around the world to do the things that I do and I don’t have them with me. I couldn’t do this if it wasn’t for them. I am looking forward to just reconnecting with them, may be a quite beer with my family will be lovely, said Baber.
On his game plan to take NZ down in the final match, Baber said he relied on the boys to execute the plan on the field, and they delivered after the final whistle. 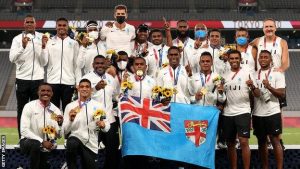 “I was quite relaxed during the final generally because the boys made a huge effort to get there in the first place and I know generally in the finals we tend to perform. A little bit of nervousness around the quality of what NZ put together in the semi-final match but we also knew as a coaching staff that we had a game plan that could beat NZ. We needed to be aggressive and forthright with them.

He said it was a joy to see that your plan worked when you see the final score – 27-12.

“What was nice right at the end there before the end of the game that we realised that game plan worked. All the players contributed to that, not just for the final but throughout the three days.

“I know things have been in tough in Fiji and it was the foundation of what we did in the past six months and that was to lift the gold here in Tokyo and make everyone back home smile and celebrate, even though those celebrations might be muted, said Baber.

The win and the sacrifices were acknowledged by the highest ranking International Olympic Committee (IOC) executive in Oceania, Dr Robin Mitchell, also from Fiji.

Dr Mitchell who did the honours to present the gold medal to the Fiji men’s sevens team said the win inspired other athletes from Oceania.

“It was really good to have this moment of joy that we can all celebrate. The team worked really hard before the lockdown, they kept training as best they could and it showed today that they were one of the fittest teams on the ground. This win has lifted the spirits of every Fijian, especially what we have gone through in the last 18 months.

“We are doing this for all Oceania family because they know Fiji can do it, and we are doing it for the Pacific. It could have been Tonga or Samoa – so it’s the same inspiration for all the teams that we can make it if we out our effort into it. I think all our Oceania family are proud of Fiji’s sevens team. They were all here today to show their support for our boys, said Dr Mitchell.

He said Fiji’s influence in rugby sevens at the world stage has inspired other countries to introduce the sport in their countries. 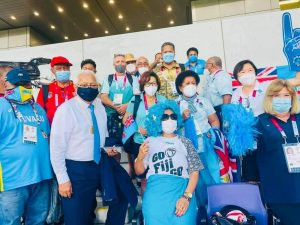 “This win shows what we can do and also to other countries around the world. I was talking to some sports administrators from San Marino earlier and they are planning to introduce rugby there.

“Rugby 7 s was such a big hit in 2016. The next year the front page of the Olympic Solidarity news was the Fiji Team. The fact that we are a small island country and this is our second gold medal, this is a huge achievement. Even at the IOC, it’s all about rugby sevens for Fiji. A lot of the IOC staff were here today to cheer on Fiji because they really appreciate what we have achieved, said Dr Mitchell.

Tokyo is the only second Olympic Games where sevens rugby has been featured as an Olympic sport. Rugby sevens was added to the Olympics following the decision of the 121st IOC Session in Copenhagen in October 2009. The champions for the inaugural rugby sevens tournament in 2016 were Fiji for the men and Australia for the women.