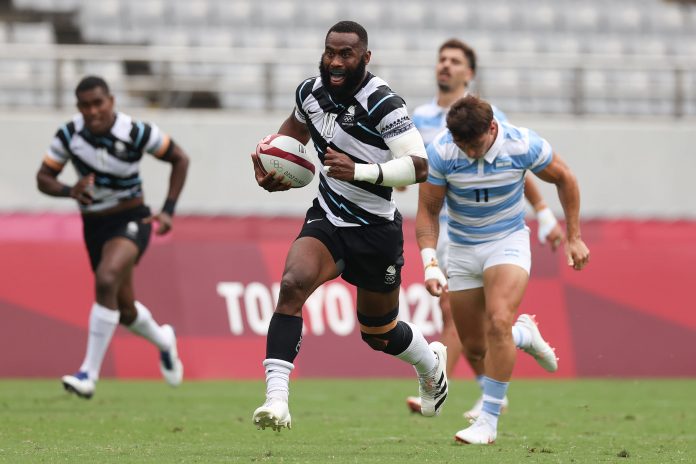 New Zealand and Fiji will meet in the gold medal match of the men’s Olympic sevens tournament at Tokyo 2020.

The All Blacks Sevens, who finished fifth at Rio 2016, made sure of their place in the medal final with an impressive 29-7 defeat of Great Britain in the semi-finals.

New Zealand dominated possession for most of the match and led 14-7 at half-time after Scott Curry and Regan Ware touched down either side of a Dan Norton score.

Great Britain won silver five years ago, but their hopes of at least emulating that success were ended in the second period as Ware, Dylan Collier and co-captain Curry crossed the whitewash to put the seal on a dominant victory.

The All Blacks Sevens are now guaranteed a first men’s Olympic sevens medal, but they must overcome the defending champions if they want to make it gold.

Fiji booked their place in the gold medal match with a 26-14 defeat of Argentina in the semi-finals, but were made to work hard for victory.

Having raced into a 12-0 lead through tries from Sireli Maqala and Meli Derenalagi, Fiji conceded twice in the closing stages of the first period, to Marcos Moneta and Ignacio Mendy, and trailed 14-12 at the break.

Jiuta Wainiqolo scored a breakaway try to put Fiji back in front in the second half, before Semi Radradra made sure of their place in the gold medal match, which kicks off at 18:00 local time (GMT+9), with a score two minutes from time.

Argentina remain in the hunt for their first men’s Olympic sevens medal, and will take on Great Britain in the bronze medal match at 17:30 local time at Tokyo Stadium.

The USA will meet South Africa in the fifth-place play-off at 17:00 local time (GMT+9) on Wednesday, after Mike Friday’s side won a see-saw encounter with Canada 21-14.

Carlin Isles gave the USA the lead within three minutes, but Harry Jones struck on the stroke of half-time to level the score.

Martin Iosefo and Justin Douglas traded tries at the end of the second period, and after Jones had been sin-binned Isles sprinted down the left wing to win it for the Americans.

The USA now face a rematch against South Africa, who beat them in the pool stage, after the Blitzboks held off an Australian comeback to win their fifth-place semi-final 22-19.

South Africa sprinted into a 17-0 half-time lead thanks to tries from captain Siviwe Soyizwape and Ronald Brown (two).

Australia narrowed the deficit to five points in the second period as Lachie Miller and Josh Turner crossed the whitewash, but JP Pretorius’ breakaway effort meant that Maurice Longbottom’s late score was nothing more than consolation.

Next up for Australia is the seventh-place play-off against Canada, which will kick-off at 16:30 local time in Tokyo.

In the opening match of day three, hosts Japan recovered from 7-0 and 12-7 down to record their first win of Tokyo 2020 and condemn the Republic of Korea to 12th place.

A yellow card for Andre Jin Coquillard, who had opened the scoring, on the stroke of half-time proved decisive as Ryota Kano and Chihito Matsui crossed either side of the break to give Japan a 26-12 lead.

Jose Seru and Seongmin Jang were both sent to the sin bin in the second period before Kazushi Hano’s late try put the seal on a 31-19 win for the hosts.

Ireland had missed out on a place in the medal quarter-finals despite beating Kenya 12-7 in the pool stage, but they had no answer to the Shujaa in the ninth-place play-off.

Johnstone Olindi scored the first try of the match at the end of the first half, and the Kenyans ran in three further scores in the second as Jacob Ojee, Willy Ambaka and Daniel Taabu all crossed the whitewash.

Kenya captain Andrew Amonde’s final act on an international sevens pitch was a missed conversion in front of the posts, but it mattered little as his side won 22-0.

British diplomat on climate: ‘This is existential’