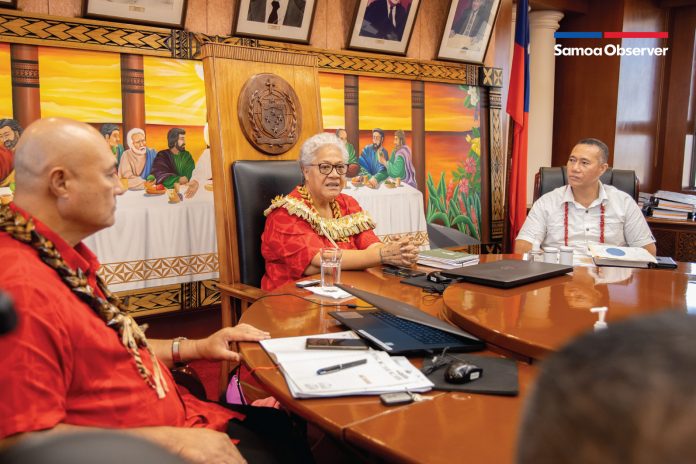 Samoa has turned a new political page as the country’s first female Prime Minister, took office today and conducted its first Cabinet meeting at the Government House in downtown Apia.

Fiame Naomi Mata’afa was first elected into parliament in 1985 when she was 27 years old.

Today, she occupied the Government’s seat of power in a building named after her late father, Fiame Faumauina Mulinu’u 11 who was Samoa’s founding Prime Minister, when the country became independent in January 1962.

At around 10.00am, Mata’afa and the Ministers congregated at the Cabinet conference room for their first meeting. Top of the agenda was an emergency budget that needs to be passed by parliament as the main estimates 2021/2021 ended 30 June 2021. Because of the four months long political impasse, Parliament was not able to meet and pass a budget.

The media was allowed to film and take photos of the historical event where a party, the Faatuatua I le Atua Samoa ua Tasi – FAST, that has only been in existence for a year has managed to unseat and end the 36-year rule of the Human Rights Protection Party.

Tuilaepa Sailele Malielegaoi who has served as Prime Minister for 22 years, finally gave up leadership Monday and acknowledged the new FAST Party government.

At around 9.00am, the country’s new Prime Minister, Mata’afa arrived at the Government building and rather than taking the PM’s private elevator to her office, she waited for her Ministers to arrive at the foyer. Then used the public elevator and accompanied each minister to check into their offices before settling into hers.

At each office, Mata’afa welcomed the Ministers then continued on to her own.

In her office, occupied up to the weekend by the previous Prime Minister, it was bare, with the photos of the country’s six Prime Ministers since independence in 1962 lined up on the main wall.

The respective CEOs and assistants were also on hand to welcome the new ministers including supporters.

In her Cabinet’s first meeting in Cabinet room, she welcomed the media and invited the nation to Cabinet’s working room and that they have begun their work as the country’s new administration.

It has been 109 days since the country has been under a political impasse that ended when the Court of Appeal ruled last Friday that the FAST Party was legally sworn in on 24 May 2021 and must proceed to rule.

“No rush for Parliament to meet” – Samoa Prime Minister Mata’afa