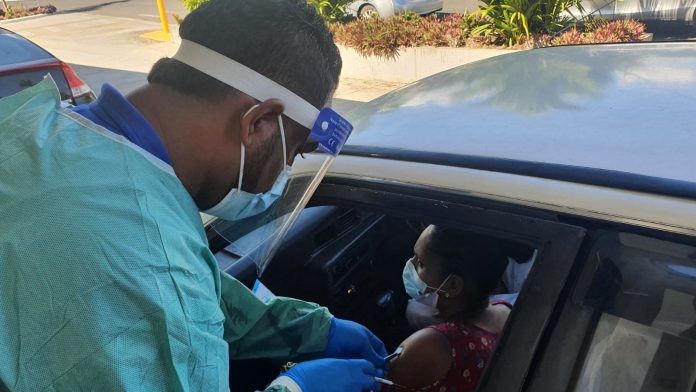 Former Health Ministry doctor Jone Hawea says Fiji Government’s “no jab, no job” policy threatens the livelihoods of those who do not wish to be vaccinated against COVID-19.

Dr Hawea made the comments during a virtual discussion on Government’s ‘no jab, no job’ policy last week.

Dr Hawea said he was not “anti-vaccine” but was against the manner in which Fijians were being forced to take COVID-19 jabs.

He said it would be unethical for him to be against vaccination because he was trained at the Fiji School of Medicine and was taught about the benefits of vaccination.

“It is because I am vaccinated, I am alive and healthy today,” he said.

Dr Hawea said vaccines produced in the past went through rigorous trials and testing and had well documented “proven track records of benefits versus harm”.

“All medicines have side effects. For a medicine like a vaccine to have a proven track record, it must have an almost perfect track record of maximum benefits versus the harm.”

Dr Hawea claimed the COVID-19 vaccine was a trial vaccine.

“I am for vaccination.

In the context of this new vaccine – because it is untested – I am against forcing it, especially when threat to life is being used.

“You threaten my livelihood, you are threatening my means to live and the means to live of my family and as a doctor, I cannot encourage that.

He said the law was being used to justify forceful vaccination.

“I have to satisfy the box of justice in my medical ethics. All the four pillars of ethics – autonomy, do no harm, maximum benefit and justice – are of equal importance. They all must be satisfied in order for me to agree to the practice,” he said.

Meanwhile, the head of the Catholic Church in Fiji says the church supports medical ethics requiring people’s rights to be respected.

Archbishop Peter Loy Chong highlighted this during a virtual conference discussing the Government’s “no jab, no job” policy.

The archbishop said he understood the perspective on medical ethics after the explanation from former government doctor Jone Hawea.

He said the church held the view that people’s rights should be respected.

“Freedom should be respected. You step over the freedom of a person, you step over his dignity, lower him down to less than a human being,” he said.

“Medical ethics on Catholic social teachings agree on a definition or understanding of freedom as an essential part of dignity of the human person.

“So, basically, Catholic social teachings totally agree with the medical ethics that the freedom of people should be respected because it’s part of their human dignity.”

In another development, the National Federation Party says “it is clear Government thinks it is OK to sacrifice its citizens and destroy their livelihood, by assuming that vaccination is the only answer to winning the war against COVID-19”.

Party leader Professor Biman Prasad said “the total absence of empathy, compassion and remorse by government will leave a permanent scar on our nation”.

“Even in death, there is no dignity,” he said.

“We have been told that in many cases the deceased are lying on the floor in plain view of others before being taken to the morgue.

“Even the final journey of the departed is mired in uncertainty.

“And this sad and painful chapter is the handiwork of the leaders of a Government that doesn’t give a damn.”

Prof Prasad said the Health Ministry should also clarify why a limited number of funerals were allowed daily, leading to the pileup of bodies in the mortuary.

“The Health Ministry should clarify whether only six funerals are allowed per day.

“This is unjust because mourning relatives want to hold the final rites at the earliest given the threat of the pandemic affecting them and the fact that numbers at a funeral are severely restricted.

The current Government is completely abandoning its moral obligation and responsibility for the health, well-being and safety of the citizens”.

Prof Prasad said the “don’t care” attitude and complete lack of care and compassion was a feature of the 2021/2022 budget address by Economy Minister Aiyaz Sayed-Khaiyum “when there was no mention whatsoever of the pain, suffering and tragedies suffered by people”.

No progress on Fiji bubble until COVID is controlled: Australia