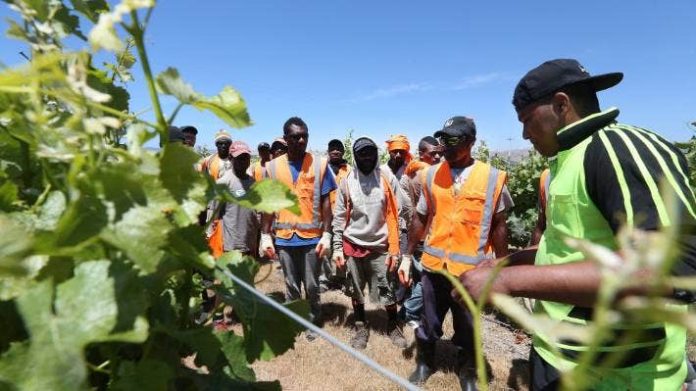 One hundred and fifty seasonal workers have landed from Vanuatu, but New Zealand’s horticultural employers would happily take six times as many.

The latest group of workers is in managed isolation in Hamilton, and new groups will arrive each fortnight.

Auckland used to host the recognised seasonal employer (RSE) workers for isolation but, from now on, they will isolate in Ibis Hamilton Tainui and Jet Park Hamilton.

Coming straight into isolation is new for many workers, as is the cold weather, but that’s not all – some haven’t used a smartphone or seen a lift before.

The current all-male group will head to Blenheim to work for Hortus once isolation is complete.

Employers wish there were six times as many places on flights as what’s available, Chapman said.

The programme helps horticulturalists, gives people from the Pacific the chance to earn “considerable money”, and has led to some long-term relationships with the workers’ villages, he said.

“New Zealanders are the backbone [of the industry] but there just aren’t enough.”

And there are few backpackers left in the country, he said.

The latest RSE crew from Vanuatu arrived from late 20 degree Celsius temperatures into managed isolation during a Kirikiriroa cold snap.

Pasifika support workers helping them asked an interpreter how to say “cold” in Bislama, but were told there was no point, K’aute Pasifika navigator Alfin Moke said.

They instead needed to learn “freezing”; that’s what it was by Vanuatu standards.

Moke came to New Zealand from Samoa six years ago and remembers the kind of culture shock he can see in some RSE workers.

“It’s quite the sensation, helping them, seeing their smile after I connect them to wi-fi,” he said.

Many workers now have their first smartphone, and he’s helped set up email accounts so they can download apps to contact family.

He and his colleagues have tried introducing themselves in Bislama, and are working on picture instructions for isolation for workers with low literacy.

And they’ll help connect the workers with Blenheim groups before they leave, after the mandatory 14 days.

“A lot of them are just eager to get out of quarantine and start working,” Moke said.

While the group’s in isolation, there are menu tweaks to give a taste of the islands. For example, a corned beef, cheese and pineapple panini, and lamb chop suey feature.

Breaking it down, that’s more than 400 people a day, or one every three-and-a-half minutes, he said.

The RSE workers come from a low-risk country, he said, and about 2500 similar workers will fly in between now and the end of April – “a regular 150 per fortnight”.

Hamilton’s first lot arrived on Sunday, July 4, and some had never seen a lift before, so there’s a bit of explaining and learning to be done.

In-facility interpreters are helping with the language barrier.

While te reo isn’t familiar to the RSE workers, hearing it spoken it has been emotional for many returnees who have come through Kirikiriroa over the past year, Brown said.

One woman flagged him down after a whakatau to say she hadn’t heard the language since her Māori husband died more than 20 years ago.

The welcome and farewell ceremonies are born out of Kīngi Tūheitia’s desire to ensure manaakitanga (hospitality/support) for returnees, Brown said.

The king has strong links to Pacific leaders – and titles from various Pacific Islands, which Brown will use in kōrero when relevant to groups arriving.