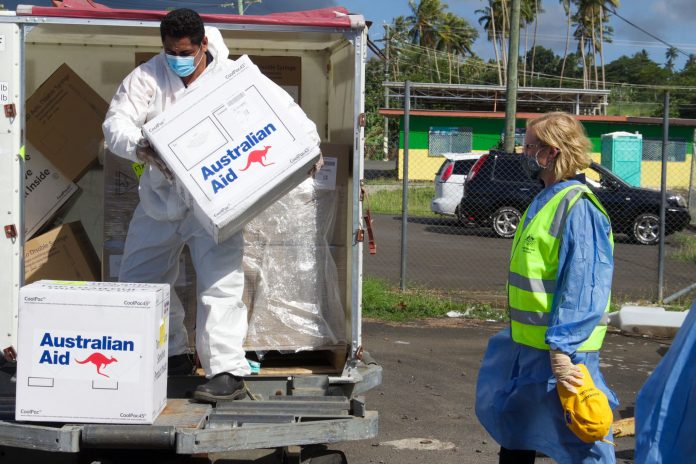 The rapid response has been welcomed in Fiji, with the Pacific nation recording 873 new COVID-19 cases in the Health Ministry’s latest figures on Monday.

“There are people dying. Our health systems are giving up and so, I think Australia, New Zealand, they have a team here… they are genuinely trying to help,” Prasad said.

The flight will carry 17 personnel, and additional resources including PPE, and three ambulances, specifically requested by Fiji’s Ministry of Health.

Minister for the Pacific Zed Seselja told SBS News the two governments have in ongoing communication about the provision of Australian support.

“We’ve responded to all of the specific requests we’ve had. We of course, stand ready to provide further assistance. Fiji is one of our closest friends in the region,” he said.

The race to assist Fiji comes as China’s influence grows in the region.

Jonathan Pryke, director of the Lowy Institute’s Pacific Islands programme, said Australia has not been alone in offering support to the Pacific neighbour.

“There has been another driver added to why we’re scaling up aid to the region, and that is China’s growing presence in the Pacific over the last two decades,” Pryke said.

Australia has sent close to 400,000 AstraZeneca vaccines to Fiji, with other doses donated by New Zealand, India and the World Health Organisation’s COVAX facility.

The federal government says its policy towards Fiji has been consistent, adding its increasing support has not been influenced by China.

“We’ve been providing this kind of support over many, many years, and we respond to humanitarian emergencies,” Minister Seslja said.

“There’s obviously strategic competition in the region, and we’re very aware of that. But what we have in our relationships in the Pacific, I think is deeply held and long lasting.”

“We have not received Sinopharm,” Dr Fong said.

“We have enough committed by New Zealand and Australia for AstraZeneca.”

Those comments coincided with accusations from China that Australia was “undermining” China’s vaccine co-operation in the Pacific.

“We certainly make no apology for a very swift and comprehensive response. It is not about any other country,” he said.

Pryke said the decision not to take China’s vaccine offering is unlikely to be related to geopolitics.

“It’s simple messaging to just keep advocating on the one individual vaccine… So, I think it’s more about practicalities about logistics. They don’t want to complicate the rollout,” he said.

Fiji was the first Pacific nation to open diplomatic ties with China during the mid-20th century, but that relationship strengthened significantly, following a military coup in 2006.

In response, western nations including Australia imposed sanctions on the military government.

Opposition Leader Prasad said this gave China the opportunity to offer its own economic support.

“Wherever countries have seen a weakening of democracy, a weakening of freedom of association and human rights, then there is always somebody else to fill the gap,” he said.

“Obviously, in Fiji’s case, you know, it was a role played by China.”

Pryke said this has caused some concern amongst other multilateral partners, over China’s potential strategic influence in the region.

“The Chinese footprint in the Pacific has really exploded in the last two decades,” he said.

“It has certainly driven a lot of anxiety in Western nations like Australia, New Zealand, the U.S and Japan to re-engage in the Pacific.”

This engagement has expanded since Fiji elected its first democratic government since the coup in 2014.

But Pryke said since multilateral agencies came back, Fiji hasn’t taken out a new loan from China.

“They clearly do want to work with the West as much or even more than they do with China. But we need to be in the game,” he said

Dr Krupali Tappoo, a GP administering vaccine on the front line of Fiji, says the ongoing support from Australia and New Zealand has been crucial.

“With the increase in the number of cases, it’s taken a huge toll,” she told SBS News.

“If we didn’t have access to these vaccines, I think we would be in a in a different way, things could have been worse,” he said.