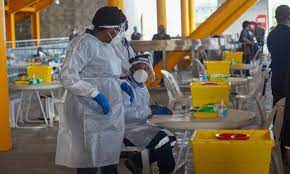 The allegation, first aired in Chinese state-controlled media and then amplified by the foreign ministry in Beijing, was “absolutely not” true, the Australian government said on Tuesday.

The spat is the latest flashpoint in the deteriorating relationship between China and Australia amid intense competition for influence in the Pacific region.

The Global Times, a Chinese state-run newspaper, said it had “learned exclusively from sources that Australia has been racking its brain to undermine China’s vaccine cooperation with Pacific Island countries” and had “planted several ‘consultants’ in the national epidemic prevention center in Papua New Guinea”.

The paper accused Australia of “working in the shadows” to delay the authorisation of the emergency use of Chinese vaccines in PNG and of “threatening senior officials from welcoming Chinese vaccines”.

“Those in Australia who take advantage of vaccine issues to engage in political manipulation and bullying coercion are being callous to the life and health of the people in PNG,” Wang told reporters on Monday, in response to a question from CCTV, another state-controlled broadcaster.

But the Australian minister for international development and the Pacific, Zed Seselja, told the ABC the claim Canberra was interfering was “absolutely not the case” and “rejected by the Australian government”.

“My message to people who may have read that, or other articles, would simply be to look at Australia’s record during this period, and over a long period of time, of providing high-quality healthcare support and providing vaccine support,” Seselja said.

Seselja arrived in PNG on Sunday for a trip aimed at strengthening “cooperation on health security and infrastructure”. He met with the prime minister, James Marape, in Port Moresby on Monday.

In an interview with the ABC’s PNG correspondent, Natalie Whiting, Seselja said the Australian government was “fulfilling our moral and economic responsibility” to the region.

“We come to these issues in good faith, and we’ll continue to do things that are in the interests of our region and in the interest of our friends and neighbours, most particularly PNG,” Seselja said.

The Australian government announced on Tuesday it was planning to allocate up to 15 million doses of Covid-19 vaccines to the Pacific and Timor-Leste, saying it would help “our closest partners” to “achieve comprehensive vaccine coverage”.

The allocation comes from the 20 million doses that Scott Morrison pledged to the broader Indo-Pacific region when he attended the G7 summit last month, although the deadline for delivery is mid-2022.

“Australia has already shared more than half a million vaccine doses with our Pacific and Timor-Leste partners since March,” Seselja and the foreign affairs minister, Marise Payne, said in a statement.

Marape said in March PNG was also “working closely with the Chinese government” and “once the vaccines from China are cleared by the medical board then we will bring that in as well”.

Australian government officials have previously raised concerns that China’s vaccine diplomacy could come with “strings attached”, saying it “wouldn’t be surprising if there were conditions attached in some instances”.

But Wang hit back at that idea on Monday, saying China was doing its utmost “to help developing countries save more innocent lives”. “We have no geopolitical agenda and attach no political strings,” he said.

The latest dispute is part of a broader rift between China and Australia over diplomatic, trade and security issues.

Beijing announced last month that it was launching a formal challenge against Australian tariffs on several Chinese products.

That follows Australia’s own twin challenges at the World Trade Organisation against Beijing’s imposition of tariffs on Australian barley and wine.

China has blocked ministerial-level talks for at least the past year, amid a souring of the relationship over a range of issues including Australia’s early public calls for an international investigation into the origins of the coronavirus and its criticism of China over the crackdown on dissent in Hong Kong and human rights abuses in Xinjiang.