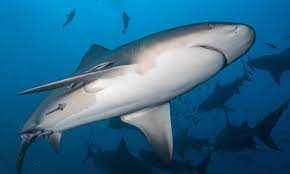 The apex predators show preferences for certain individuals and avoid others, according to new research on sharks in Fiji

They reach 3.5 metres long, weigh more than 200kg and are an apex predator. But even apex predators need friends. And, according to new research, bull sharks may be capable of making them.

A recently published study from Fiji shows that bull sharks develop companionships – with some sharks showing preferences for certain individuals and avoiding others.

Researchers studied data collected over 3,000 shark dives in Fiji’s Shark Reef Marine Reserve (SRMR), one of the world’s most sought-after diving destinations. The dives spanned 13 years and noted the behaviour of 91 individual bull sharks, clearly distinguishable by external features, such as scars and deformed or missing fins.

Using a number of statistical approaches, the researchers looked for patterns of associations between sharks that could be explained by factors other than just pure chance. And indeed, the scientists found unequivocal evidence for long-term associations.

“Some bull shark individuals seem to prefer long-term companions and avoid others,” said Dr Juerg Brunnschweiler, an independent shark researcher from Switzerland who designed the study.

“Working on the large Fiji dataset was really exciting and scientifically important since there is a big research gap regarding the social behaviour of bull sharks,” said Dr Thibaut Bouveroux, a post-doctoral researcher from the Dauphin Island Sea Lab in the United States and lead author of the study.

Bouveroux usually investigates how and why marine mammals create social bonds. For this study, he used his social structure analysis skills and applied them to Fiji’s bull sharks.

“The available long-term data collection gave us a real opportunity to better understand if bull sharks are able to develop social bonds in a provisioned site and how they were affected over time,” he said.

The marine protected area off the coast of Fiji’s largest island Viti Levu is home to eight shark and hundreds of fish species. Bull sharks, large and inquisitive animals that can reach up to 3.5 metres in length, are one of the main attractions.

The data for the 3,000 shark dives was recorded by Beqa Adventure Divers, a conservation-driven dive centre operating on the South Pacific Island since 2003.

“Beqa Adventure Divers has been maintaining a database that contains data on all shark species, behavioural data and many other parameters from every single dive. It’s a rich source of all kinds of information,” Brunnschweiler said.

However, the fact the data was collected on “baited” dives – where the dive companies place feed into the ocean to attract sharks to the dive site – should be taken into consideration when analysing the results, the researchers cautioned.

“Bull shark presence at the SRMR [Fiji’s Shark Reef Marine Reserve] is driven by spatial aggregation caused by feeding, so we need to be very careful when interpreting our results,” Brunnschweiler said.

Whether the sharks turn up together because they “like” each other, whether they just happen to live in the vicinity or whether they share character traits, such as boldness and curiosity, which leads them to the provisioned site, is not clear.

“The main caveat is that we don’t have a control site,” Brunnschweiler said. “For example, if we have two individuals that are observed together at the SRMR more or less regularly, and if they also show up together at another site with the same or similar probability than at the SRMR, then this would make our results much more robust. And would indicate that there is indeed some level of sociality in this species.”

But Brunnschweiler said the study provided a solid starting point for future work. He is planning to build on this knowledge with additional analyses.

“Future studies will have to identify personality traits of individual sharks, determine how particular traits might influence group formation, construct a bull shark hierarchy to determine rank positions and then examine rank stability over time.”

Both researchers cautioned against over-interpreting their data.

“Bull sharks cannot be considered a social species like marine mammals or other terrestrial species, such as elephants or chimpanzees. However, it seems that some individuals are capable of developing preferred co-occurrences or affinities (and avoidances) with some individuals,” Bouveroux said.

And while bull sharks form companionships, Brunnschweiler does not approve of the term “friendships” being used in relation to sharks.

“Friendship is a relationship of mutual affection between people. Not animals,” he said. “It would be anthropomorphic to speak of friendships here, said Bouveroux.