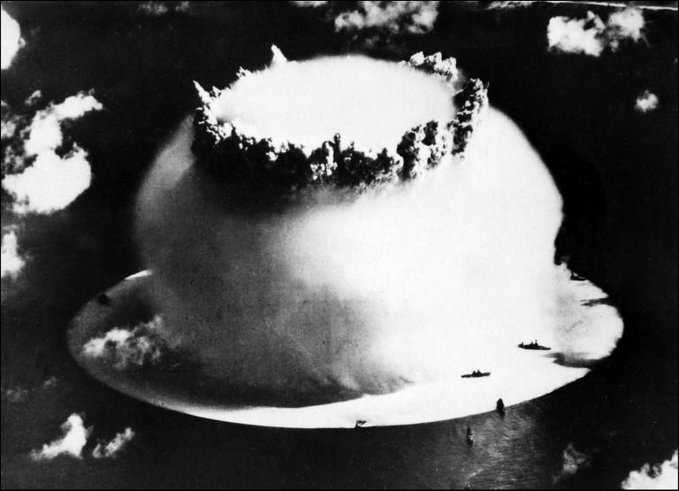 Seventy-five years after the U.S military began using the Marshall Islands as a nuclear testing ground, a new generation fired-up by climate activism is demanding justice.

When the Able atomic bomb was detonated at Bikini Atoll on 01 July, 1946, Alson Kelen’s family were among those forced from their palm-fringed ancestral homes.

For decades, complaints were muted. Many accepted at face value promises from the U.S Navy that they were in no danger and would be safely relocated away from the test sites.

But abnormally high cancer rates among the displaced islanders — who are either unable to return to their radiation-tainted homelands or must live alongside leaking deposits of nuclear waste — tell a different story.

Washington at the time was preoccupied with winning the Cold War arms race against the Soviet Union. The plight of Pacific islanders was considered a low priority next to the communist threat.

Today, Kelen’s generation has found its voice taking the industrialised world to task over climate pollution blamed for rising seas that threaten to swamp the low-lying Marshalls, which sit barely a metre above sea level.

He likens climate change to “another nuclear test that is forcing us to fight for our survival” in the Pacific archipelago of 58,000 people, spread over 29 atolls and more than 1,100 individual islands and islets.

The 53-year-old, a member of the Marshall Islands Nuclear Commission, is among those now demanding Washington address the consequences of the 67 nuclear tests on the atolls of Bikini and Enewetak between 1946 and 1958.

The U.S military’s exit was arguably as calamitous for the Marshalls as its testing programme, with assurances given in the 1970s to Bikini islanders that it was safe to return home.

They proved to be false, forcing another relocation, but not before a new generation of children, including Kelen, were exposed to radiation in food grown on contaminated farmland.

Military engineers dumped nuclear waste in a bomb crater in Enewetak atoll, capped it with a 45-centimetre (18-inch) thick concrete dome and again gave residents the all-clear to return.

The dome on Runit island has now developed cracks and has been described by UN chief Antonio Guterres as “a kind of coffin” in the heart of the Pacific.

Washington attempted to draw a line under the issue in 1986 by paying the Marshalls US$150 million in compensation for nuclear test damage.

An independent tribunal later estimated the health and environmental damages to be more than US$2 billion.

Extraordinarily, the Marshalls’ nuclear history was not taught in local schools until last year, when it was finally added to the curriculum after a lengthy campaign.

Once the focus of a small group of activists, the issue has now become more widely known.

Ariana Tibon, 25, admits that growing up she knew nothing about the nuclear weapons test legacy and said it was hard to get younger people interested.

Now the nuclear commission’s education and public awareness director, Tibon believes the situation has changed and she is intent on telling the stories of previous generations.

“I feel like the nuclear survivors are outcasts, they are angry and frustrated. I understand it because nothing is being done to help them,” she said.

Tibon hopes the same history will one day be taught in U.S schools, so Americans understand their nuclear legacy in the Pacific.

For Kelen, Washington needs to right the wrongs committed when the Marshalls helped the United States hone the nuclear arsenal that gave it an edge in the Cold War.

“If I could speak to President Biden, I’d say, ‘the Marshall Islands is the reason the United States is able to talk to Russia and other countries (from a position of strength). Please just give us a little focus,”’ he said.

“We are the small picture that created the big picture. But we’re not on the agenda,” said Kelen.