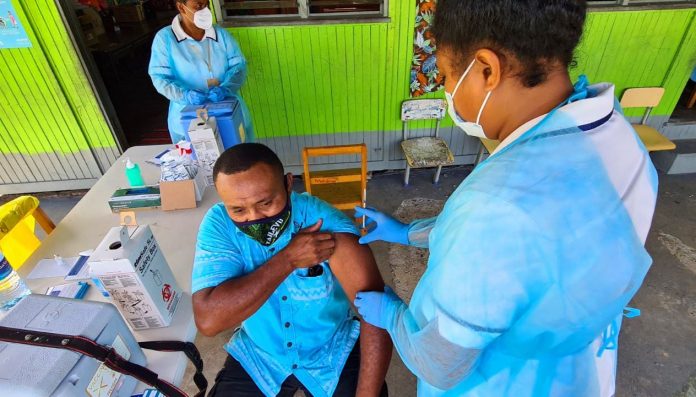 Fiji has reported 241 new cases of COVID-19 infections and one death Monday.

Ministry of Health permanent secretary Dr James Fong says five cases are prison officers from Suva who are undergoing 14 days’ quarantine at the FSC Compound in Rakiraki as part of essential movement from red zone to green zone when they tested positive.

“They were undergoing 14 days’ quarantine at the FSC compound as part of the essential movement from the red zone to the green zone when they tested positive,” Dr Fong said.

He said the remaining cases are from the Lami-Suva-Nausori containment zone.

“The remaining cases are contacts of known cases, cases that were seen in screening clinics and were swabbed, and cases under investigation to determine possible sources of transmission,” Dr Fong said.

Dr Fong said a 50-year-old man from Newtown has been reported to be the latest COVID-19 death.

He said the man is believed to have died at home and was declared dead on arrival by doctors at the Valelevu Health Centre.

“He was reported to be in severe respiratory distress before death,” Dr Fong said.

“He had received the first dose of the vaccine early this month. He was not fully vaccinated.” said Dr Fong.

He also confirmed that a death previously reported as under investigation had now been classified as a COVID-19 death by doctors.

“This is a 62-year-old man from Grantham Rd who presented to the FEMAT field hospital in respiratory distress and died on the same day,” Dr Fong said.

“He had been having respiratory symptoms, including shortness of breath, for at least a week before presenting to FEMAT.

“According to protocol, he was swabbed and tested positive for COVID-19. He was not vaccinated.”

There are now a total of 17 deaths due to COVID-19, with 15 from the current outbreak that started in April.

One death is still under investigation to determine if it was caused by COVID-19.

He said eight COVID-19 positive patients died from pre-existing non-COVID-19 related illnesses that they had been receiving treatment for at the CWM Hospital in Suva.

There are currently 21 COVID-19 patients with severe illness admitted at CWM Hospital.

There have been 26 new recoveries reported since the last update, which means that there are now 3027 active cases in isolation.

There have been 3,726 cases during the outbreak that started in April.

The Ministry has recorded a total of 3,832 cases in Fiji since the first case was reported in March 2020, with 779 recoveries.

Fiji has tested a total of 150,878 samples since the second COVID-19 outbreak began in April this year.

He added that updated testing numbers from the Tamavua Twomey Laboratory had been received for June 25, therefore, the total testing number for that day had been updated.

A total of 1138 individuals were screened and 279 swabbed at our 56 stationery screening clinics throughout the country.

This, to date, brings Fiji’s cumulative total to 211,474 screened and 27,598 swabbed at the stationery screening clinics.