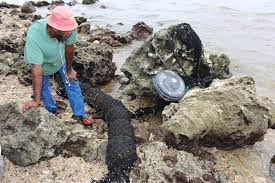 The numbers of drifting fish-aggregating devices in the Western and Central Pacific Ocean (WCPO) have been underestimated, an ongoing study by the Pacific Community (SPC) shows.

Dr Escalle has written about the first year of data collection in issue 164 of SPC Fisheries Newsletter, which has just been published.

Nearly 60% (93) of the drifting objects counted were unattached satellite buoys. Of the drifting FADs, 43 had no buoy attached, and 22 did. Most were found on the eastern side of Wallis Island.

Dr Escalle is collecting data on drifting FADs that become beached or drift into the waters of Wallis and Futuna from elsewhere in the Pacific. The study will help OFP scientists and the Western and Central Pacific Fisheries Commission understand the impact of FADs and just how many there are. The project began in early 2020.

She said most of the retrieved components had been recycled, and were now being used in hammocks, or as nets for chicken pens, anchored FADs or outdoor solar lamps and phone chargers.

An experiment in which a wave buoy was added to a FAD has shown that national fisheries agencies can gain valuable data by collaborating with meteorology agencies.

The buoy, which records wave heigh, provides the GPS location of the FAD it is attached to, making it easier for fisheries to track and recover the FAD because it monitors position in real time.

Data from the wave buoy can also be used to help keep tuna fishers and others at sea safe. The buoy in the experiment withstood waves 7.1 m high when Tropical Cyclone Niran passed through New Caledonian waters during the experiment. Wave height had been forecast to reach 5.8 m, said SPC researchers Adrien Moineau, of SPC’s Geoscience, Energy and Maritime Division, and William Sokimi, of the Fisheries, Aquaculture and Marine Ecosystems (FAME) Division.

They said other advantages to fisheries agencies were in understanding how moored FADs react to currents and wind, and that FADs could be tracked if the mooring line broke.

Are variations in El Niño natural or due to the climate crisis?

In the same newsletter, Dr Patrick Lehodey from OFP reports that the complexity of the patterns of El Niño Southern Oscillation (ENSO) make it difficult to work out how much these reflect natural variability and how much they might be changing because of the climate crisis.

“We now know that profound changes driven by ENSO – at the scale of the whole Pacific Ocean – have an impact on many ecosystems and marine resources, including changes in the distribution of tunas,” Dr Lehodey said in issue 164 of Fisheries Newsletter.

He said that the International Panel on Climate Change projects that, under “business as usual” scenarios, both La Niña and El Niño phases will be more extreme. The 2015–2016 El Niño was extreme. But because observations of the climate and oceans have occurred for a relatively short time compared with climatic changes, they don’t know whether it was within the range of natural variability – or if it marks the beginning of what people can expect in El Niño years. Their analysis was made more difficult because the La Niña phase that followed was unexpectedly mild.

The latest Fisheries Newsletter also reports on the FFA-commissioned study into waste generated by fishing vessels in the WCPO and ways that the marine pollution burden might be lessened. There is also an article on the Pacific Fisheries Leadership Programme, funded by the New Zealand Ministry of Foreign Affairs and Trade to help Pacific Island states meet the goals of the Regional Roadmap for Sustainable Pacific Fisheries.