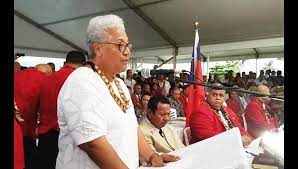 Samoa Supreme Court’s decision on the legality of the swearing in ceremony performed by the FAST Party on 24 May 2021 in a tent outside Parliament’s locked doors, will be delivered Monday 28 June.

The legal challenge by the Attorney General raised a number of constitutional issues such as the powers of the Head of State, the jurisdiction of the Court to hear such matters, the relevant actors that could solve the current problem and take things forward and the missing notice that called the first sitting of the 16th Parliament in 2016.

He set down two common grounds in his submission that the hearing must proceed on the basis that the Assembly or Parliament has not yet met and the answer must be related to the Constitution which is the basis and foundation of the claim on the legality of the swearing-in ceremony.

Central to Rishworth’s submission was the suggestion that the swearing in of the Speaker (Papalii Li’o Masepa’u) was not properly done because it was not done before the Head of State.

The Head of State was absent so the Speaker was not duly sworn in as required by the Constitution, said Rishworth.

Because the Parliament building was locked, FAST conducted the swearing-in ceremony under a tent on Parliament premises at Mulinu’u.

Rishworth said the Constitution requires the Assembly to meet in the Parliament chambers at Mulinu’u, and that can only change when the Head of State appoints elsewhere for Parliament to meet.

“The place the Assembly sits is called the Chamber where its sessions and business are conducted,” said Rishworth.

However, the Constitution does not mention that specifically and Rishworth noted that, but quickly pointed out the affidavit of the Clerk of the Legislative Assembly Tiatia Gramme Tualaulelei.

Tiatia’s affidavit stated that when Parliament meets elsewhere, they need the endorsement of the Head of State for a specific location for them to meet “and that is the significance of this affidavit,” he said.

“The interpretation of the proclamation must meet in chamber, such is the norm, nonetheless, there is no specific requirement in the Constitution that the Assembly can only assemble in the Chambers, perhaps however, is the expectation,” said Rishworth.

It was at this point that Justice Vui Clarence Nelson pointed out to Rishworth that there was a time the Parliament building was under construction and the Legislative Assembly had to meet at the TATTE complex and at Tuana’imato.

Vui asked whether there is a document before the court of the order given by the Head of State in respect of those meetings.

Richworth asked Fuimaono Ainuu of the Attorney General’s office to confirm the whereabouts of the document.

“We could not locate the notice calling the 16th Parliament, but the document calling Parliament at TATTE,” Fuimaono told the court.

“What happened to the notice calling the 2016 Parliament?” Justice Vui asked.

“We could not locate the notice Your Honour,” Fuimaono replied.

“Or you put it in the rubbish,” Fuimaono – Vui responded (to courtroom laughter).

Rishworth’s argument comes down to the Speaker not being properly sworn in and questions if the Court can do anything or rule on this case.

According to Rishworth, there is not much reason for the Court to even consider it.

He agreed that the current (political) situation in Samoa is delicate but because the Assembly had not yet met to warrant the use of the doctrine of necessity.

“This needs to be dealt with by “relevant actors” as soon as possible,” he argued.

Justice Vui asked that if the Court declared the swearing-in as constitutional, was that a legal basis for the next step to be taken by the relevant actors to implement a way forward?

He referred to Parliament to convene 45 days after the general election and what needs to be done now that the 45 days had been and gone.

“I’m interested in the suggestion of “relevant actors” once the Court answered the question and a way forward, but are you saying it is not our function to make any direction on that regard?”

“Would it be fair to say one of the “relevant actors” would have to be the Clerk of the Legislative Assembly?” asked Justice Vui.

“When I made the submission, that was not one of the relevant actors I had in mind,” Rishworth responded.

Justice Lesatele Rapi Vaai pointed to Rishworth’s submission where he conceded that the calling of Parliament on the 24 May was mandatory.

“Yes I do accept that the Supreme Court made the 20 May order, was also a proclamation consistent with the Constitution,” Rishworth responded.

Rishworth‘s answer was to refer to a scenario in a previous election and a writ.

“And with the 26/25 number, a new government is elected, and the Caretaker Government ceases, right?” asked Lesa.

“Your Honour, the question takes us to a different direction. The legal question pertaining to the legality of what took place that day. Your Honour’s question is what could be done in relation to the 26/25 of….” Rishworth argued.

Lesa pushed on saying that if the new government was elected, what happens to the Caretaker Government? No Government?

Rishworth responded that that was a matter for the Court to decide and Lesa reminded him of his submission that there were no compatible reasons for the Court in Samoa to consider the validity of the swearing in ceremony.

“I put it to you that the current situation in Samoa is delicate?” asked Lesa.

“We had an election on the 9 April. It is now 2 months, and elector’s answers have not been fulfilled. The Respondents answered. Are you saying that there are no compatible reasons for the Court to consider the validity of it?” asked Lesa.

“The answer is within the Constitution and with assistance from several partners such as the Court, relevant actors, and even the political parties,” Rishworth responded.

Counsel for the Respondents, Benjamin Keith said the voters are not served by prolonging the case and there is a need to be served on the purpose why they voted.

Keith’s submission touched on the importance of democracy and Government’s existence is a critical point to democracy.

He said the plaintiff after stopping the convening of Parliament, cannot come and rely on their arguments in Court.

Justice Lesa asked if the Court should stop here or move forward to which Keith said “move forward.”

“The Court can go as far as considering the meeting, the election and the swearing in and they can go further,” Keith argued.

“My learned friend said there is no emergency but I differ because this is more of an emergency matter after two months of elections and there is still no Government,” said Keith.