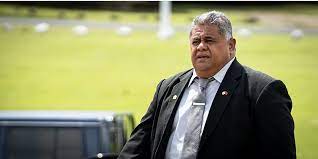 Fa’atuatua i le Atua Samoa ua Tasi (FAST) party is seeking clarity from the court to overcome the differed interpretation of the situation from that of their rivals, the deputy leader, Laauli Leuatea Schmidt confirmed.

Speaking on Friday, the Member-elect of Gagaifomauga No. 3 said the Government is in a deadlock due to the Human Rights Protection Party’s claims that Parliament can only convene after the post-election legal challenges are complete.

“We cannot convene Parliament, or transition into Government because Tuilaepa Sailele Malielegaoi and the HRPP believe that it isn’t until the petitions are done, a new Government can be determined,” he said on the EFKS TV’s Soalepule programme.

“But that’s now how the processes worked before. In the past, right after the general elections, whatever the result is, whatever the number, even if there is one more that puts a party in the majority, Government is formed.

“But we are seeing with sadness, as previously said, the HRPP and the caretaker Government are simply refusing to leave their chairs.”

The caretaker Prime Minister, Tuilaepa, is the only caretaker leader that remains in his Cabinet office at the Fiame Mata’afa Faumuina Mulinuu II (FMFMII) building in Matagialalua whilst the rest of the ministers have vacated their offices.

La’auli said the impasse has reflected the the need for clarity from the court following the Appellate Court’s decision earlier this month.

“Those who are arguing include, a former Attorney General, a lawyer, and others are former Members of Parliament; they have completely dismantled what is happening right now and what must be done first,” he said.

“The issue with the additional woman has been clarified, and we leave it at that, it won’t be until after legal petitions, we will see if she will be appointed again or not.

“But this does not stop the convening of Parliament.”

Aliimalemanu Alofa Tuuau of Alataua I Sisifo was appointed as the sixth member after the 09 April Election, until it was revoked by the Supreme Court, deeming it unconstitutional.

An appeal was filed and despite upholding a decision to declare her warrant of election to Parliament void, the court of Appeal commended Aliimalemanu for the vigour which she had shown in pursuing the matter.

But the inclusion of another woman MP in the Legislative Assembly could be months away until all election results, which include legal challenges to court results and possible by-elections, are finalised.

“Although we have found that 10 per cent means 6 women in Parliament it remains to be seen whether second respondent [Aliimalemanu Alofa Tuuau] will be appointed as an additional member to satisfy the requirement,” the Appellate Court concluded

The uncertainty of Aliimalemanu’s appointment leaves the FAST party with a 26 to 25 lead in sitting MPs over the HRPP until electoral petitions are resolved by the court in due course.

However, caretaker PM has repeatedly said that the ruling had guaranteed the HRPP 26 MPs, or a 50 per cent share of seats in Parliament, meaning neither party would be able to form Government.

Last Thursday, Tuilaepa said no party has the majority, yet.

“Up to now, we still don’t know who has won. That’s the real situation.” Tuilaepa said during the state-owned radio 2AP programme.

“Up to right now, we don’t know who won [the election]; the Court decision says we are now equal, 26 each side, the only difference is, the additional woman is invoked only after the current court cases.

“Remember, the decision was from the Court of Appeal, this means after the decision is delivered it is done.”

Tuilaepa has also publicly accused the FAST party as the primary factor behind Samoa’s ongoing failure to convene Parliament.

Both parties are staking their claims as the nation’s official government following the swearing-in of Samoa’s first elected woman Prime Minister, Fiame Mata’afa, outside Parliament last month under a tent, as Tuilaepa refuses to relinquish power insisting the ceremony was illegal.

The validity of a swearing-in ceremony will be called in court today to determine its legitimacy.

Laauli also decried the lack of impartiality of public servants shown as the nation’s political uncertainty drags on.
“And I notice with pity that whatever is said by the caretaker Government is followed by heads of Government. This is another massive impact of this impasse,” he said on Friday.

“Whatever the caretaker government says, the Ministry leaders do.

“What is most disappointing thing is that shouldn’t be the situation. Their decision must be neutral and purely independent according to the Court decision and established policies like after any general election and leading up to Parliament convening.”

Laauli also noted that with a total of 28 constituencies going through election petition cases and other election-related cases, Samoa will be stuck in an uncertainty phase for another two to three months.