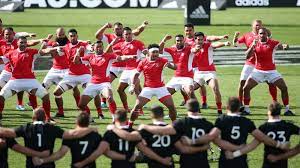 Fifteen new caps have been included in the Tonga rugby squad to face the All Blacks and Manu Samoa in New Zealand next month.

The 30-man squad includes 22 players based in New Zealand, with four from France, two from Australia and one each from Japan and Italy.

Hingano is among a handful of players already part-way through 14 days of managed isolation (MIQ) in New Zealand, but Tameifuna’s arrival depends on how far his club side, the Bordeaux Eagles progresses in the French Top 14 competition.

The Eagles face European champions Toulouse in the semi finals this weekend. If they lose, the experienced front-rower will board a plane to New Zealand on Sunday, but if they advance to the final his departure will be delayed by a week.

‘Ikale Tahi head coach Toutai Kefu said he hoped to have as many as 28 players available to play the All Blacks in Auckland on 3 July, but was not sure if the players in MIQ would be up to it, as some were only due to be released three days before the game at Mount Smart Stadium.

He said Covid-19 made it very tough to select the squad and it was disappointing that more than 20 mostly uncapped players turned them down.

Tonga Rugby Union chief executive Peter Harding said a number of those players were worried being capped by Tonga would risk affecting their club contracts, while some were discouraged from playing by their agents.

After facing the All Blacks, Tonga will play two Rugby World Cup qualifying tests against Manu Samoa, in Auckland on 10 July and Hamilton a week later.

The winner will secure their berth in the 2023 tournament in France, while the loser will play-off against the Cook Islands.

The trio are unavailable for the July tests because of the requirement to quarantine for 14 days on arrival in New Zealand.

Tasman winger Tima Fainga’anuku was set to join the sevens team in Monaco, but because he only has a Tongan passport Immigration New Zealand said he would be unable to re-enter the country on his return.
‘Ikale Tahi squad: