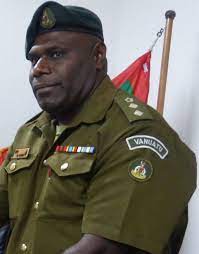 Vanuatu President Obed Moses Tallis, has appointed Colonel Robson Iavro as the Commissioner of Police. The instrument of appointment was signed by the President on 11 June.

Order No. 75 of 2021 stated that the President made the appointment in exercise of the powers given to him to undertake such task under the Police Act (CAP 105).

Colonel Iavro is a graduate from the New Zealand Army Officer Cadet School in the 1990s.

He then pursued further university studies for three years at the Laucala Campus in Suva, Fiji Islands where he graduated with a Bachelor of Management before embarking on a Master’s Degree program in Public Policy at the Australian National University.

On his return to Vanuatu from his studies he was posted to various senior appointments at the Vanuatu Police Force Headquarters and Vanuatu Mobile Force (VMF).

The new Police Commissioner was formerly the Director of the Police Training College and was also the Commander of VMF.

The U.S strategy to counter China in the Pacific could be...