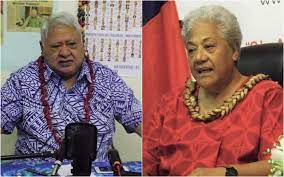 Samoa’s prime minister-elect was locked out of the Pacific nation’s parliament in extraordinary scenes Monday, as her political rival refused to accept electoral defeat prompting claims of a coup.

Fiame Naomi Mata’afa arrived at parliament ready to be appointed Samoa’s first female prime minister, accompanied by judges in formal robes and horsehair wigs whose job was to witness her swearing in.

Instead, they were barred from entering the parliamentary chamber as police looked on while her supporters sang hymns and called for the results of an 09 April general election to be honoured.

“We need brave Samoans right now … to uphold our election,” Mata’afa told the crowd gathered in the parliamentary grounds.

After 22 years in office, incumbent Prime Minister Tuilaepa Sailele Malielegaoi has refused to relinquish power, even though the courts have confirmed Mata’afa secured a narrow one-seat majority in last month’s vote.

“This is an illegal takeover of government, that’s what coups are,” she told New Zealand’s Newshub.

“We have to fight this because we want to retain this country as a country that is democratically ruled, premised on the rule of law.”

Parliament was supposed to convene on Monday morning with a ceremony led by Chief Justice Satiu Simativa Perese.

He led a procession of judges from the Supreme Court to parliament, but when confronted with a locked door they turned around and headed back to the courthouse.

Mata’afa and hundreds of supporters remained in the parliamentary grounds for about an hour, singing and making speeches.

While they were there, the clerk of parliament’s legislative assembly arrived and apologised for locking the chamber, saying he could only allow Parliament to sit on the orders of head of state Tuimalealiifano Vaaletoa Sualauvi.

Sualauvi on Saturday ordered plans to convene parliament on Monday be scrapped, but the Supreme Court overturned his ruling during a rare Sunday sitting and said it should go ahead.

“We support Samoa’s democracy and we would call on others to do the same,” PM Ardern told TVNZ.

“Obviously now is a really difficult crossroads, this is a big change for Samoa over what’s been occurring in the part 20 years in their elections.

“Our call would be to maintain and uphold the rule of law,” She said.

“Australia values our close friendship with Samoa. It is important that all parties respect the rule of law and democratic processes,” she tweeted.

“We have faith in Samoa’s institutions including the judiciary,” she said.

New Zealand foreign Minister Nanaia Mahuta “encourages all parties in Samoa to continue to uphold the rule of law and show respect for their constitution and democratic process,” said on Twitter.

Meanwhile, Samoa’s Prime Minister Tuilaepa Sailele Malielegaoi says he will remain in office, despite an order by the country’s Supreme Court that lawmakers sit to appoint a new leader.

“We remain in this role and operate business as usual,” Tuilaepa told reporters in the capital Apia.

“There is one Head of State, he has the power to Convene Parliament, and only him.”

Tuilaepa hosted a gathering of the Human Rights Protection Party (HRPP) denouncing the actions of FAST at parliament grounds and accusing them of “breaking and entering”.

“They have desecrated the grounds of Parliament, and have made a ruckus in our hallowed grounds, they are trying to use force to open the House of Parliament,” he said.

“They should know better,” he said. “There remains to be only one recognisable government even if it is a custodian government. The public responds to one prime minister and ministers and that is with this government.”

Supporters of the opposition parties gathered outside Parliament on Monday singing songs from Samoa’s independence movement more than 50 years ago, local media reported.

In the latest twist this afternoon, all elected Members of FAST Party were sworn in as new Members of Parliament in a tent outside a locked Parliament complex.

Li’o Papalii Masipau has been put forward by Fiame Mata’afa as Speaker of the House and confirmed by all MPs in attendance. Deputy Speaker Auapaau Aloitafua for FAST was nominated and accepted.

Samoa gained independence in 1962 after nearly 50 years as a New Zealand protectorate and the incumbent Human Rights Protection Party has been in power since 1982, apart from a brief coalition period in 1986-87.