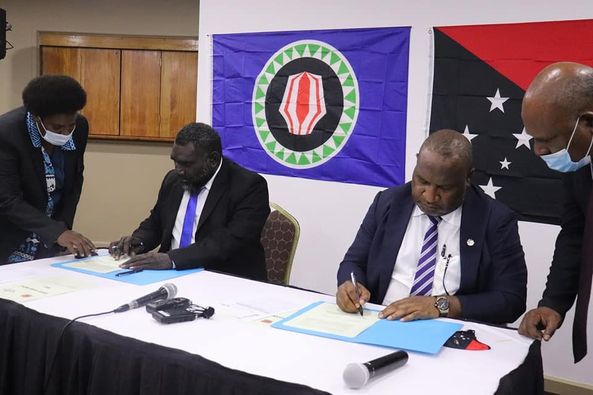 The Autonomous Bougainville Government (ABG) President Ishmael Toroama said Bougainville must have its independence within the next four years, through the election of members to the parliament of the independent state of Bougainville by June 2025.

President Toroama made this statement as he outlined the official position of the ABG as Bougainville begins the first Post Referendum Consultations with the National Government.

Following the overwhelming outcome of the Referendum in 2019 where 97.7 percent of Bougainvilleans opted for independence from PNG the two governments are finally meeting to consult over this outcome as required by the Bougainville Peace Agreement, and Part XIV of the National Constitution.

The formal consultation process began only five months ago, when both governments signed the Joint Communique on the Outcome of the Bougainville Referendum, on 11 January.

“When both governments signed the Bougainville Peace Agreement in August 2001, we committed ourselves to a “deferred 15-year referendum” period.” President Toroama said.

“This was to allow time to our people, on both sides, to heal the wounds of the conflict, and ponder over what we need to find as a final solution for Bougainville and Papua New Guinea,” President Toroama added.

“For those who fought for independence we wanted independence at that time of our negotiations over the Bougainville Peace Agreement; but in all fairness to our people, we were prepared to wait 15 years, to allow our them to have their say, through a free and fair referendum vote, at some later stage,” he said.

President Toroama said both Governments have in good faith co-operated over the last 20 years in implementing the BPA with the understanding for a referendum.

In interpreting the referendum results; President Toroama said that it is clear that Bougainvilleans have rejected greater autonomy, having already lived, seen, worked, and experienced the slow progress of autonomy under current arrangements of the Bougainville Peace Agreement, over the last 16 years.

He said Autonomy, under current arrangements or any future arrangement that is short of independence, is not an option for a solution for Bougainville.

“All we have done in the last 20 years, whether in the weapons disposal or autonomy space, were intended to bring us closer to this day, when we should consult over the outcome of the referendum, and reach an agreement on the future of Bougainville,” President Toroama said.

“Our position on the future political status of Bougainville is clear and that is independence,” President Toroama said.