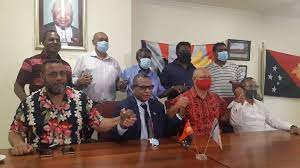 Party leader, Patrick Pruaitch, in a media conference Thursday said the move is for stability to allow the Marape led Government to complete its term before the 2022 General Elections.

The National Alliance party had two factions of its members during last November’s Vote of No Confidence against Prime Minister James Marape.

Flanked by the Government faction of the National Alliance Party members, party leader Patrick Pruaitch says the party is intact after last November’s vote of no confidence.

Pruaitch along with a majority of the NA members broke away from the Marape led Government last year after disagreements over the closure of the Porgera Mine and other key policies of the Government. Last week the Government announced it will work with Barrick to reopen Porgera.

Going into the elections he says the move is about stability in the Government as the party intends to support Prime Minister James Marape in his final term in office before the general elections.

Pruaitch also withdrew his nomination as the alternate prime minister if a vote of no confidence motion was to be entertained in this month’s parliament sitting.

The total number of National Alliance Party members in Government is 11.

Opposition Leader, Belden Namah has welcomed the decision by National Alliance Party Leader, Patrick Pruaitch to withdraw his name as the Opposition’s candidate for the post of Prime Minister in a motion of Vote of No Confidence that is already before parliament.

In a statement, Namah said the Opposition will name a new candidate to replace Pruaitch.

It will then be up to the parliament to deliberate on and deal with the motion.

Namah said the motion is live and must be dealt with by members of parliament in the coming parliament sitting.

The Opposition Leader alluded the need for a Vote of No Confidence on the crippling economy and its long term effects.

He said all members of parliament have a duty to correct this trend before it is too late.

Meanwhile, Wapendamanda MP and former foreign Minister Rimbink Pato said his move to join the ruling Pangu Pati was to provide unity and stability in governance during this challenging times.

Pato said the current challenges facing the country requires a greater call for unity and stability and he saw that he needed join to join Pangu Pati and work with the prime minister to address the challenges through his knowledge and experiences as a former lawyer and as a senior politician.

“I joined the Pangu Pati as the country needs unity now more than ever before as we travel difficult waters. There is far greater need for unity and stability to tackle the issues affecting the nation and our people,” he said.

“The prime minister, the Pangu Pati and the government today need all able hands to support.

“A lot of Pangu Pati’s young leaders have a lot of energy but it also need old hands with good experience like me and Haiveta and other quality leaders so we can blend in our experiences and rally the support the prime minister, the country and our people need.

“I’m humbled and blessed to join the Pangu Pati.

“I’m impressed with prime minister’s assurance that the United Party will work together with Pangu Pati into the future.

“The United Party, the Country Party, the National Party and the PPP were able to contribute their ideas to look at what the nation should be during the formulation of the Constitutional Planning Committee which put the constitution that gave birth to our nation today.

“So it’s time for this kind of merger that is needed at this time and I give my fullest support going forward and I thing we have a wonderful future ahead.”

MP for Moresby Northeast John Kaupa also echoed the same concerns that the country needed stability and his move reinforces that as well.

He said he also joins the Pangu Pati because of the government’s support for SMEs, something he has been advocating for in his electorate, where all the mothers are involved in…..PACNEWS